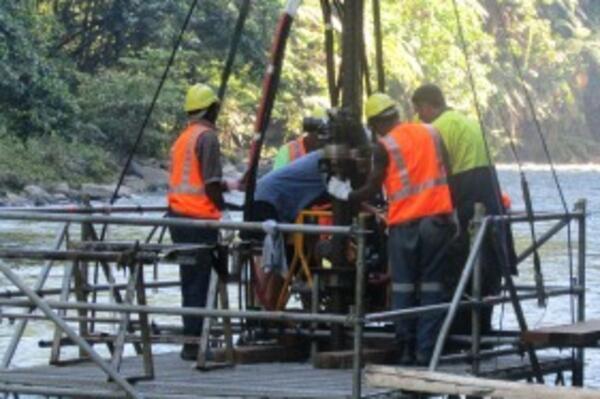 The project is expected to produce between 15 and 20 Megawatts of power and more than 80 million kilowatt hours (units) of energy every year, which is enough to meet Honiara’s current demand.
Source: tina-hydro.com/
Share
Monday, 11 August 2014 07:14 AM

The companies participating in the event were from Australia, New Zealand, Korea, Japan, Malaysia, Spain and Sri Lanka.

The investor’s forum marked the closing of an Expression of Interest (EOI), part of the International Competitive Tender process seeking Developers for the Tina Hydro Project.

The ICT is a transparent process managed by the International Financial Corporation as Financial Transaction Advisors to the Solomon Islands Government on the Tina Hydro Project.

Over 100 international companies, including global energy companies, registered their interest in the project with eight potential investors travelling to Honiara for the briefing.

“We have entered the next phase of the project, one that will see the development of a new partnership – one between the private sector and the public sector”.

“This is another area where Tina River is breaking new ground in this country. The involvement of the private sector in an Independent Power Producer (IPP) and Build Own Operate Transfer (BOOT) basis is a critical element in the realization of Tina River Hydro,” said Mr Hou.

Minister Hou told the investors that Tina River Hydro is the country’s flagship project, one that is unprecedented in scale, longevity and scope of benefits.

“The implementation of Tina River Hydro will provide a cross-cutting boost to our country’s economy. Not only by ensuring reliable grid power to Honiara and northern Guadalcanal, but by ensuring power that will be stable both in quality and in price. By separating our power supply from the uncertainties inherent with world oil markets, we look forward to the ability to plan our economy on the basis of predictable power costs and predictable foreign currency outflows,” Mr Hou said.

Tina River Hydro Project is a Solomon Islands national project, supported by the World Bank and the International Finance Corporation (IFC), Australia and the European Investment Bank, to build a hydroelectric scheme on the Tina River in Central Guadalcanal.

Once operating, the project is expected to produce between 15 and 20 Megawatts of power and more than 80 million kilowatt hours (units) of energy every year. This is more than enough to meet Honiara’s current demand.

The international tender is being supported by IFC with the winning bid expected to be announced in early 2015, and construction of the dam to start in 2016.

The World Bank has expressed its interest to provide several forms of support to the project, including: a partial risk guarantee to back-stop a guarantee provided by the Solomon Islands Government; loan or equity financing from IFC, as well as possible risk coverage for the developer by the Multilateral Investment Guarantee Agency (MIGA).