Hundreds March in Honiara Against Corruption 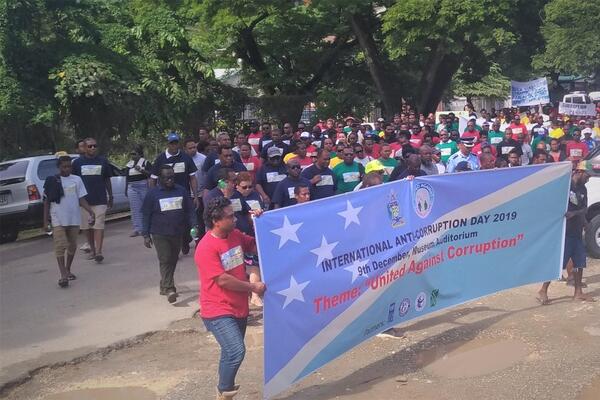 The UN Secretary General Antonio Guterres urged people everywhere to continue to work on innovative solutions to win the battle against corruption and to ensure that precious resources serve the peoples of the world.
Source: Supplied
Share
Tuesday, 10 December 2019 05:55 AM

Solomon Islands celebrated/commemorated the International Anti-corruption Day yesterday, under the theme: ‘United Against Corruption’, with hundreds of people from all walks of life, participating in the march through Mendana Highway, as a show of solidarity against corruption.

The march against corruption and other related activities to commemorate the International Anti Corruption Day (IACD) today was spearheaded by the Solomon Islands Government and NGOs, supported by UNDP.

The large turnout and active participation of representatives from civil society, Government agencies, private sector and other members of the public was a clear testimony of people’s concerns about the seriousness of problems and threats posed by corruption to the stability and security of the country. The march began from the car park of the Honiara City Council and concluded at the National Museum Auditorium where there were speakers and panel discussions on the theme of the day “United Against Corruption”.

The Solomon Islands Prime Minister, Manasseh Sogavare, as the keynote speaker, reassured people that the fight against corruption is the highest priority of his Democratic Coalition for Advancement Government (DCAG).

When delivering the keynote address Mr Sogavare said to do nothing about corruption is not an option.

“As your Prime Minister, with the support of my Cabinet, we are committed to combat and rid our country of this malignant culture.”

The Prime Minister then officially announced the inaugural Chairperson and members of the newly established Solomon Islands Independent Commission Against Corruption (SIICAC) who will lead the fight against corruption.

“The roles of SIICAC include prevention and awareness, more importantly it will also have an investigation and prosecution role for corruption offences,” he said.

UNDP, through its Transparency and Accountability for People of Solomon Islands Project (TAP) has been working in partnership with the Office of the Prime Minister and remains committed to supporting the Government in the fight against corruption.
Speaking at the closing of the IACD events, UNDP Operations Manager, Mr. Keswar Leelah said Corruption must be fought because it is a major obstacle to achieving both the goals of the National Development Strategy (NDS), including the Sustainable Development Goals.

“These are aimed at generally improving the well-being of people.”

The United Nations has set International days to educate the general public on issues of concern, to mobilize political will and resources to address global problems, and to celebrate and reinforce achievements of humanity.

Each international day offers many actors the opportunity to organize activities related to the theme of the day.

The UN Secretary General Antonio Guterres urged people everywhere to continue to work on innovative solutions to win the battle against corruption and to ensure that precious resources serve the peoples of the world.