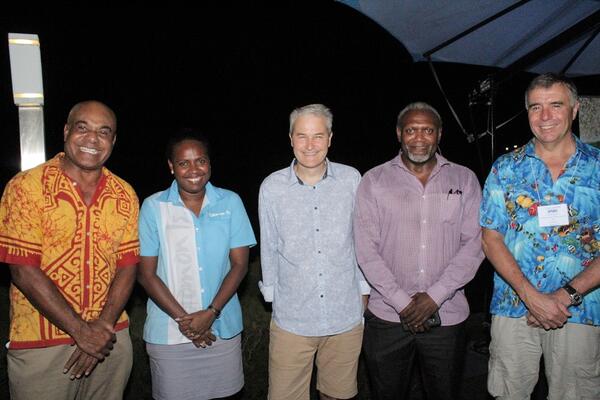 Tourism Solomons CEO, Josefa ‘Jo’ Tuamoto has praised the efforts of SPUMS co-ordinator, Australia-based Diveplanit Travel for its efforts in successfully coordinating the event, to date the biggest ever-dive related conference staged in the Solomon Islands.

“Hosting SPUMS in the Solomon Islands has presented up with an excellent opportunity to showcase our expertise in successfully delivering a major convention,” Mr Tuamoto said.

“We have long identified the MICE (meetings, incentives, conference and events) sector as playing a major role in the ‘Tourism Big Three’ – generation of foreign exchange, employment and foreign investment.

”And while our overall MICE activity is still relatively small, being able to demonstrate our capability in this area to a major international audience, as has been the case with SPUMS, stands us in very good stead as we look to further capitalise on this potentially lucrative sector.”

“Judging from the feedback received from the delegates, and the word of mouth we know is already filtering out from this event, the real winner at the end of the day is the Solomon Islands dive industry which we are confident now stands to benefit for many years to come,” he said.

Spread across five days of practical morning dive sessions near to Honiara and in Tulagi followed by scientific meetings every afternoon in the Solomon Kitano Mendana Hotel, SPUMS attracted more than 100 delegates.

The enormous task of catering to this large group of divers has been managed by Diveplanit Travel with help from many local businesses, among them local transport operator Travel Solomons and Dive Munda which stepped in to assist the Tulagi Dive team with additional dive guide support.

Describing the management of the event as a “mammoth undertaking” Diveplanit’s Simon Mallender and Deb Dickson-Smith acknowledged the tremendous support received from the Ministry for Culture & Tourism and Tourism Solomons.

“We’re incredibly thankful to the Ministry and Tourism Solomons for their unwavering support,” Mr Mallender said.

“We’d also like to say a massive thank you to the local business support received from Travel Solomons, Tulagi Dive, Raiders Hotel & Dive and Dive Munda, all of which stepped up the challenge of managing such a large group of divers.”