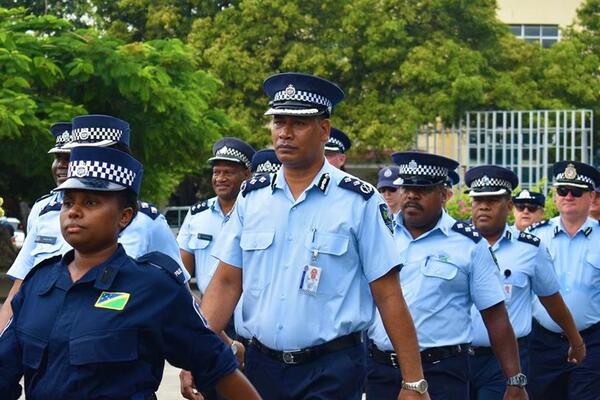 “The regulation is on restriction of movement. So this regulation as government has announced, it is to get people to be prepared. But it is a regulation that is gazetted. When it is gazetted it is a law”, Mangau said.
Source: File
By Georgina Kekea
Share
Thursday, 09 April 2020 13:57 PM

Honiara city will be on lockdown as of Friday evening.

This lockdown is purposely to test people’s preparedness in light of the COVID-19 pandemic.

Speaking to the media, Police Commissioner (Ag), Mostyn Mangau says the curfew will be enforced by the local police force.

He said police will be setting up checkpoints throughout the city during the curfew period.

Mangau said the areas declared an emergency zone will be affected by the curfew.

“Honiara city boundaries as well as from Alligator in the East to Poha in the West of Honiara”, Mangau said.

He said fines for anyone breaching this order is $10,000 or five years imprisonment, or both.

“The regulation is on restriction of movement. So this regulation as government has announced, it is to get people to be prepared. But it is a regulation that is gazetted. When it is gazetted it is a law”, Mangau said.

He said this Easter period is an ideal time to carry out this stimulus exercise. He said it is because it is one of those times in the year that people often interact in huge numbers.

Mangau said by having restrictions at this time, people can be able to really plan their activities to respond to such an exercise well.

He said only essential service workers especially those in health will be allowed to go past the check points.

“As well as emergency calls that is a matter of life and death”, Mangau said.

The curfew will be imposed on Friday night 10th April 2020 at 8pm to Saturday morning at 5am.

And again a curfew will be enforced on Saturday night 8pm to 5am Sunday morning, 12th April 2020.

During that time, residents of Honiara city are called on to remain in their homes. Shops and businesses are also not expected to open during the curfew hours.

Churches wishing to celebrate Good Friday and Easter Sunday will be able to do so in the day.