Honiara City Has a New Mayor 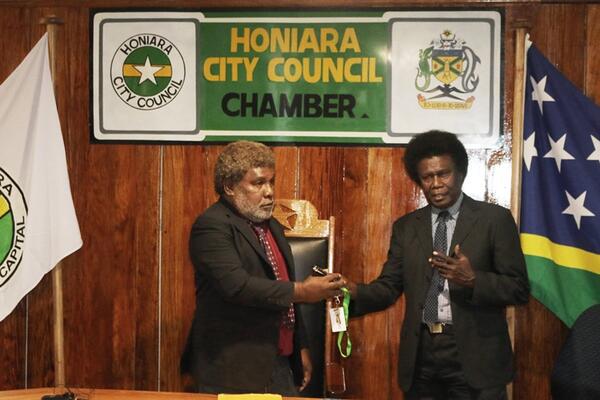 The newly elected City Mayor Wilson Mamae won by 13 votes against his only rival Reginald Ngati who got 6 votes.

In his short remarks after the declaration, Mayor elect Wilson Mamae thanked all the residents of Honiara for the confidence and trust they have in all the elected Councillors.

He said the task ahead will be challenging but assured all good citizens that his new Executive will try their best to better serve the City.

"We will revisit all the functions, structures and other matters of HCC. Also I encourage Councillors to fulfill what they have promised during their campaigns, and that is to deliver."

Mayor Mamae said he looks forward to forming his executive and will set a date to deliberate on matters.

The City Mayor is a member of the Honiara city council, equal to all other members, except for a few other responsibilities.

The mayor may have final authority over fiscal issues and will usually be the presiding member over all the council meetings, sign proclamations for the city and make ceremonial appearances.