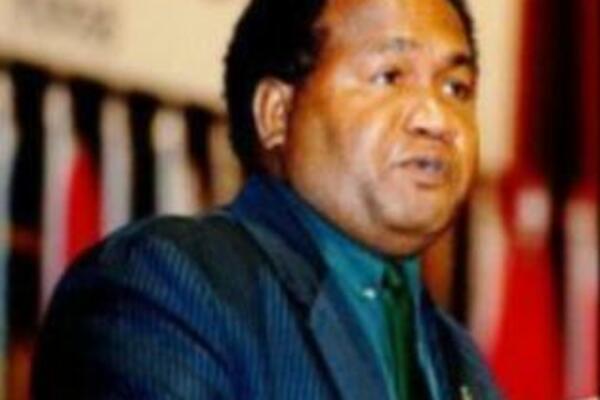 Alfred Sasako told the court that the report was provided to him by Hon. Lusibaea's wife.
Source: archives
Share
Tuesday, 23 August 2011 08:44 AM

The hearing into the defamation claim against Solomon Islands Prime Minister, Hon. Danny Philip and his former press secretary Alfred Sasako was underway at the High Court yesterday.

Mathew Wale had filed the claim in February this year following the publication of a so called "intelligence report' claiming his involvement with RAMSI and Australia to topple the current Danny Philip-led Government.

A cross examination was conducted by Andrew Radcliffe, legal Counsel for Wale in relation to Sasako's sworn statement.

Sasako told the Court that the report was provided to him at his office when he was the Press Secretary for the Prime Minister, by the wife of North Malaita M-P Jimmy Lusibaea.

He told the Court he took the report and showed it to the Prime Minister. When asked by Radcliffe if he made any attempt to check the allegations in the report, Sasako said he did.

But he refused to disclose where he checked. Mr Sasako told the Court he had written an article based on the report to the Solomon Star newspaper but the Editor of the paper had asked for a copy of the report.

He said he then gave a copy of the report to the Paper for verification purposes. Mr Sasako said he believed the contents of the document were true. He also said he was much surprised that Solomon Star was not included in the claim. He said he did not at any time have any malicious intent when he handed over the report to Solomon Star.

Meanwhile, the Chief Justice Sir Albert Palmer has ruled against three witnesses to testify on behalf of Mr Sasako. One of them was to be the person who supplied some of the information in the report.

Chief Justice Palmer said the matter would proceed as it is.

Wale's legal counsel Radcliffe will submit his final arguments into the case within seven days time.