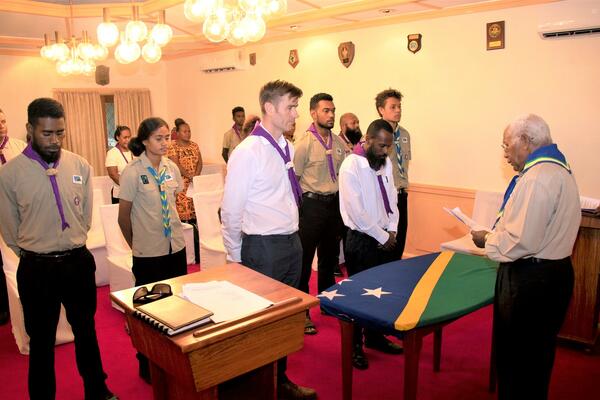 The appointment which was made last week made Jones the first international commissioner for SI Scout as it prepares to be independent from United Kingdom Scouts at the end of this month.

Jones took his oath before the Chief Scout of Solomon Islands Scout Association, Sir David Vunagi at the Government House.

Chief Commissioner Joe Billy Oge said the inclusion of Jones in SISA is very important and they look forward to working with him in the future.

Jones has been instrumental in helping the Scouts in Solomon Islands grow during his time as the High Commissioner, especially in facilitating meetings and strengthening links with UK Scouts. Solomon Islands is part of the UK Scout.

Also commissioned was Pr. Charles Tena who is now the Scout Chaplain.

Meanwhile, SISA is thankful for the support by Our Telekom that assisted the association to participate in the World Scout Conference via zoom which started last week and continues this week.

Our Telekom is supporting Scouts with a WTTX -4G LTE router to participate in the conference with three Mobile phones and top-ups for the devices.

The company’s Chief Commercial Officer Robertson Szetu delivered the equipment to Scouts in the presence of Sir David at the Government House.

Szetu stated the company’s pleasure in assisting Scouts and is looking forward to working with them in the future.
Meanwhile six young Scouts are currently taking part in the conference and the team of senior management will join them at the end of this week.