Herbert under Fire as All Whites Manages Third Place 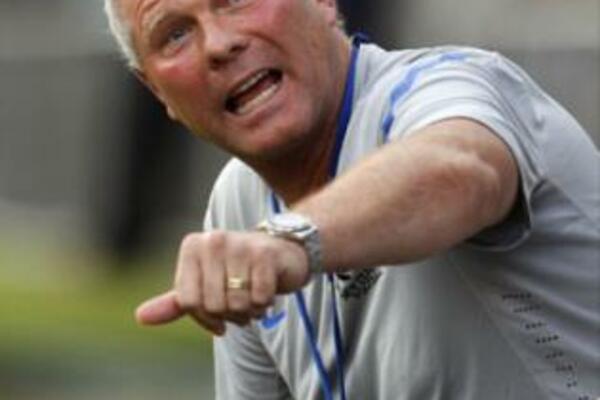 RICKI HERBERT: "It's a massive pill to swallow. We [have] all totally accepted the responsibility around that.
Source: stuff.co.nz
Share
Monday, 11 June 2012 08:39 AM

Herbert - urged yesterday to quit by former All Whites captain Danny Hay - said the last-gasp 4-3 win over the Solomon Islands yesterday in Honiara would ensure "momentum" for the World Cup qualifying series.

But he made no bid to hide that the hot favourite All Whites capitulated 2-0 to New Caledonia in Friday's semifinal.

The blackest day in Herbert's seven-season reign cost them a place in the Confederations Cup finals, a $1.8 million payday and three matches against world-class opposition.

Herbert did hail Chris Wood's first international hat-trick and praised his young starting lineup - with nine players under 22 and Aaron Clapham the oldest at 25. But he conceded the All Whites were still hurting.

"It's a massive pill to swallow. We [have] all totally accepted the responsibility around that. The only thing we could do was at least go and win the [third-place playoff] game and at least get the momentum of the World Cup campaign back on track."

Herbert will still be head coach for the World Cup qualifiers - due to kick off in September with a round of home-and-way matches with Tahiti, New Caledonia and the Solomon Islands.

New Zealand Football chief executive Grant McKavanagh said Herbert had "done it once [got the All Whites to the World Cup finals] and we think he's the man to do it again".

But Hay, who played for Leeds United in the English premiership, yesterday called for Herbert to "fall on his sword and resign".

Hay said Herbert wouldn't and New Zealand Football officials "lack the intestinal fortitude to ask the hard questions of how and why this catastrophe happened". Herbert had been "given a mandate of carte blanche [and] a reign of zero accountability for too long".

"We were taken on a special journey [to the World Cup finals] in 2010, but that was two years ago. You're only as good as your last game and now is the time for some tough decisions."

Hay wrote in his Sunday News column that "arrogance, complacency and juggling too many jobs" had finally caught up with Herbert, who doubles as Wellington Phoenix A-League coach.

Herbert's insistence on a 3-4-3 formation, "regardless of personnel", left the All Whites defensively exposed, Hay said. "Playing a back-three without the leadership of Ryan Nelsen and the athleticism of Winston Reid was a catastrophic error".

Herbert made a cryptic comment on the Oceania Football Confederation Television that he had given his youngsters a chance yesterday to press their claims for World Cup places because "we had a senior side out [against New Caledonia] that let us down".

The All Whites were "by far the better team" yesterday and could have been "five or six-nil up at halftime" instead of 3-0 ahead after Wood's first-half hat-trick, he said.

The All Whites, by and large fulltime football professionals, conceded seven goals - four to the Solomons - in five matches against Oceania opponents occupying much lower rungs on world football's totem pole.

Yesterday's victory, while deserved, was not without its anxious moments. Smeltz's winner in the third minute of injury time spared a penalty shootout after the Solomons - down 3-0 at halftime to Wood's goals in the 11th, 25th and 30th minutes - fought back to 3-3 in the second spell through Himson Tedale and two strikes by Benjamin Totori. The first Totori goal came from a goalkeeping howler with a soft shot dribbling through Jake Gleeson's legs.

Again, some of the younger All Whites looked livelier than their seniors and supposed betters. Left back Ian Hogg gets forward better than Tony Lochhead and delivered a great cross for Wood's second goal. Aaron Clapham was more industrious in the midfield holding role than an out-of-position Chris Killen.

Tahiti won the Oceania title for the first time after a 1-0 grand final win over New Caledonia.