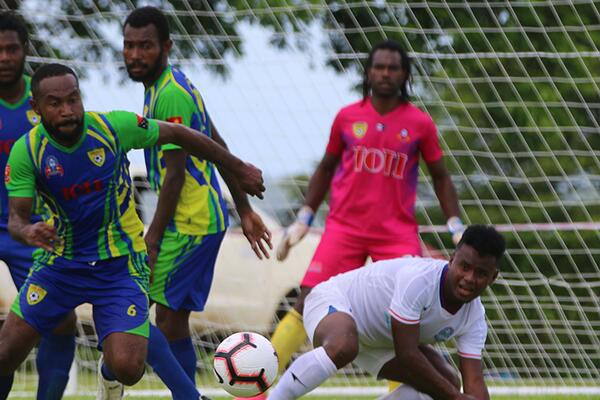 Players scramble for the ball during the Lae City vs Henderson Eels clash in Group B of the OFC Champions League in Luganville on Saturday.
Source: OFC
Share
Monday, 17 February 2020 09:49 AM

Both teams had their time with the lead in a match where three penalties were awarded.

Papua New Guinea’s Lae opened the scoring through Emmanuel Simon in the opening minutes but Henderson didn’t drop their heads.

Tuti Zama Tanito converted his first spot kick of the game in the 24th minute and when Raphael Le’ai scored his maiden Champions League goal shortly after, the Eels took a 2-1 lead to the break.

After a quiet opening to the second spell, the game exploded back into life just after the hour-mark.

In a nine-minute period, Lae scored twice – Simon got his second (a penalty) and Nigel Dabinyaba found the back of the net – to take the lead before Tanito’s second penalty levelled the match at 3-3 in the 70th minute.

Despite having a host of chances, Solomon Islands club Henderson couldn’t deliver the winning strike in a game that also featured four yellow cards.

“In terms of attacking, I was quite pleased with the pace and the chances that we created but the one thing is the lack of finishing, it was a bit poor,” Henderson coach Eddie Marahare said.

Lae coach Peter Gunemba said he was pleased that his side fought back from a goal down.

“Both sides had their chances to win, we had equal chances of scoring goals,” Gunemba said.