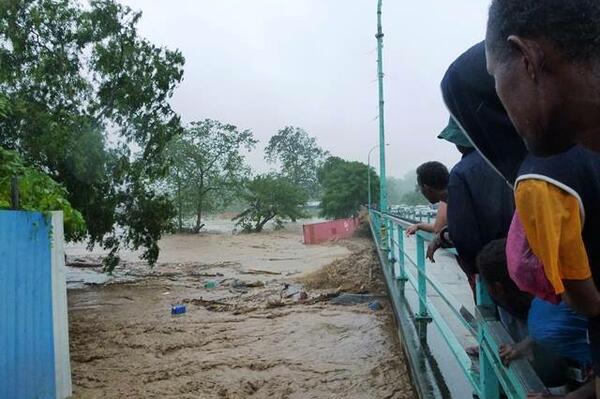 Other eyewitness reports state that others were also caught in the flood, but managed to swim to safety.
Source: Kvn Shygii
Share
Thursday, 03 April 2014 16:07 PM

Reports have stated that two people, a mother and her baby daughter, were killed after sudden flash floods swept through the Chinatown area, washing away the old Chinatown Bridge.

“The flash floods came in unexpectedly the young mother and her baby daughter was crossing the bridge at the time,” stated one eye witness.

Other eyewitness reports state that others were also caught in the flood, but managed to swim to safety.

“This is possibly the worst flooding to have hit Honiara in recent times,” said Mr Wu, a shop owner in Chinatown. “I have been here for 12 years and I have not witnessed anything like this.”

Authorities have issued a heavy flood warning for all Provinces and Islands, further warning that strong winds poses risks to sea travellers.

Authorities also warned that those living near rivers and low lying areas to move to higher grounds.

Roads towards the east of Honiara, starting from Kukum to Panatina, are now inundated and drivers are warned not to attempt crossing the floods.

The heavy downpour is caused by a tropical low 100 nautical miles South of Guadalcanal.