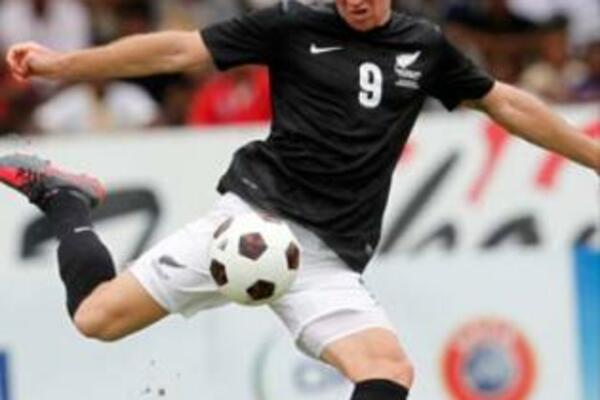 "We've played in heat before and some tough conditions in the islands but I'd have to say that's right up there as the toughest I've played in," says Shane Smeltz.
Source: http://www.stuff.co.nz
Share
Monday, 04 June 2012 09:53 AM

A week on a tropical Solomon Islands, complete with massages, R and R and slushies might sound all right to your average New Zealander in the middle of winter, but the All Whites also have a football tournament to win.

The players were spent after Saturday's surprisingly hard-fought 1-0 win over Fiji in the Solomon Islands capital of Honiara. Yesterday was devoted to recovery.

"There's no denying it was extremely tough," All Whites striker Shane Smeltz said.

"We've played in heat before and some tough conditions in the islands but I'd have to say that's right up there as the toughest I've played in."

New Zealand skipper Tommy Smith scored his first international goal to secure three points and take the lead in Group B alongside the hosts, who beat PNG 1-0 on Saturday.

Goalkeeper Mark Paston took a knee to the head against Fiji and, suffering probable concussion, remained in doubt for today's game.

Jake Gleeson replaced Paston in the second half on Saturday and, with Glen Moss still recovering from his torn adductor and unable to kick comfortably, may well start today.

Smeltz, who played the full 90 minutes against Fiji, has played most of his career in Australia, but was at pains to emphasise the difficulties in Honiara.

"I'm sure if you are watching on TV you might think why is everyone playing bad, but it feels like it takes an extra three seconds just to make a decision," he said.

It's why the work of the All Whites' medical staff may prove to be almost as important as the players themselves this week.

"I think that's where we're going to have a massive advantage," Smeltz said.

"I'd like to think compared to the other teams we've got fantastic medical staff here, doctors, physios and masseurs.

"All the boys are doing everything right and it's basically a lot of R and R. Just getting your massages, food's massively important and, obviously, sleep too. You can go get a great massage and sort of chill out and do everything right. There's only so much you can do in 24 hours but we're going to do everything we can to make sure we're up for the next one."

Among New Zealand Football's tricks are ice vests and iced towels used before, during and after games.

"We're trying some new things as well where we're taking in - instead of just water - slushy or ice-type drinks with electrolytes involved," Smeltz said.

"That's designed to keep you cool from the inside so we're trying everything and if it works just 1, 2, 5 per cent, then that's an advantage to us."

All Whites coach Ricki Herbert was looking forward to again locking horns with PNG coach Frank Farina, with the pair having clashed frequently throughout their playing and coaching careers.

"I think tactically and organisation-wise, they'll be very strong."