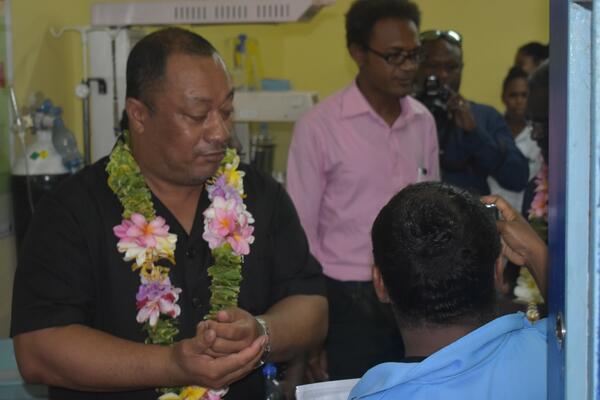 He said there is truth in what the doctors have said to the Prime Minister and it is important the issues are brought forward to be resolved.
Source: Georgina Kekea
By Georgina Kekea
Share
Friday, 24 April 2020 07:10 AM

Health Minister Hon. Dickson Mua has commended doctors and nurses at the labor ward and the National Referral Hospital in general.

Following a government’s delegation visit to the National Referral Hospital on Monday, Mua said as Minister responsible he appreciates what the doctors and nurses has highlighted to the Prime Minister’s delegation.

He said he was very impressed with the way the doctors had looked after their wards, especially those they had visited.

He said he will look into the current state of labor ward and has instructed the Permanent Secretary to follow up more on the issues faced at labor ward now.

He said as Health Minister, all he wants is improvements at the national referral hospital and its facilities.

He said there is truth in what the doctors have said to the Prime Minister and it is important the issues are brought forward to be resolved.

The Prime Minister and his delegation were shown the dire need of women and children at the labor ward during their visit to the National Referral Hospital on Monday.

Currently the labour, post-natal and gynecology wards are said to be in need of urgent assistance from the government.

On average 15 babies are born everyday, causing a strain in the labor department of the national referral hospital.

The proposed birthing and urban health center at Naha, East Honiara is still under construction.

The government of Australia is financing the project with SBD$25 million.

The Naha birthing and urban health center is expected to alleviate some of the problems faced at the national referral hospital.

It will have the capacity to deliver 1500 low risk births in a year.