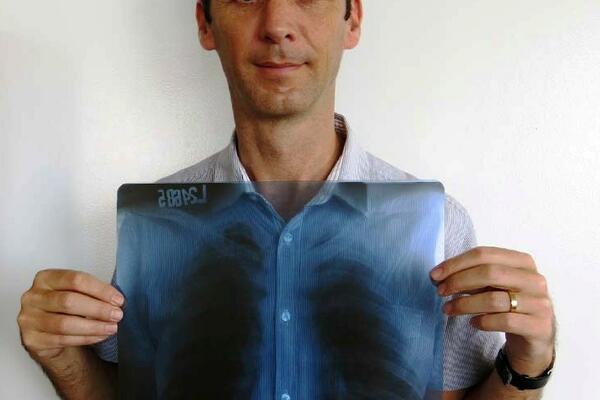 ‘My first though was that I was having a heart attack,’ Walsh says. ‘It was just this intense pain like I’d never felt before. I couldn't breath, I couldn't move, I thought I was going to die.’
Source: Photo supplied
By Irene Scott
Share
Friday, 31 May 2013 13:08 PM

To recognize World No Tobacco Day, Head of the European Union mission in Solomon Islands, Eoghan Walsh tells his story of his battle to give up smoking.

Early in the morning, on the 1st of November 2009 a stabbing pain was tracking its way through Eoghan Walsh’s body.

‘My first though was that I was having a heart attack,’ Walsh says. ‘It was just this intense pain like I’d never felt before. I couldn’t breath, I couldn’t move, I thought I was going to die.’

‘I thought, maybe if I have a cigarette it’ll go away?’

He was working in East Timor at the time and a friend rushed him to the nearest hospital where they did an X-ray.

‘They thought I had tuberculosis,’ he says.

But after a few days on antibiotics the pain was still there, a constant reminder that something was very, very wrong.

‘It was awful, I was sleeping for 16 hours a day,’ he says. ‘I couldn’t speak a whole sentence without gasping for breath, I could only walk about 30 meters and I’d need to sit down and rest. I knew something wasn’t right.’

He took the X-ray to another clinic for a second opinion. ‘It took the doctor about five seconds to have a look and tell me I had a collapsed lung.’

‘He said it happens to tall, skinny males, between 20-40 years old who smoke. I ticked all the boxes.’

Eoghan started when he was 18, and after many failed attempts to quit had been a smoker for 18 years.

‘I think the first time I gave up I just decided it wasn’t good for my health,’ he says. ‘I knew the cigarettes were bad for me, they made me feel terrible, I’d have a bad cough, get sick all the time. My skin was terrible, my clothes stank.’

‘I remember talking with a bunch of friends and they said, ‘When are you going to give up?’ and I said, maybe in a few months? They said, ‘why not just do it tomorrow?’

‘I was going diving the next day so I took my last packet of cigarettes and buried them under a rock 18 metres under the water. I figured when I came up from the water I’ll be out in the middle of nowhere, with no cigarettes and that’s it, I’ll have given up.’

‘I lasted six months. But then I’d be out with friends who were smoking or get stressed and pick them up all over again. The same old story.’

In 2008, the Government released the findings of the Global Youth Tobacco Survey. More than 600 young people in the Solomons between the ages of 13-15 were asked what they thought about smoking.

More than 40% said they had smoked, more than 90% wanted to stop smoking and more than 80% had tried to stop in the last year.

So Eoghan is certainly not alone.

‘If you think about it, every smoker gives up every night. For 8 hours while you sleep you don’t smoke and the nicotine begins to leave your body. And every morning, you wake up and make the decision to be a smoker again. It’s all in your mind’

For Eoghan, over 18 years of smoking, he’d made that early morning decision more than 5,000 times.

‘I tried lots of ways to give up,’ he says. ‘Going cold turkey, nicotine patches, hypnotism, everything.’

‘I needed to come to my own decision that I wanted to stop. And I think that’s the really important part.’

In time, Eoghan did recover.

‘It was very slow progress,’ he says. ‘When I was better I flew to Singapore and they did all these tests. They told me I also had emphysema, TB and all these chest problems.’

‘I was only 37 and the doctor said, ‘You’ve been smoking for 18 years, half of your life. If you stop now, your lungs can start to heal and within a few years your lungs will be back to about 90 percent of your full lung function.’

‘So that was my wakeup call. That was the final motivation I needed to stop starting again.’

Today is World No Tobacco Day and the Minister of Legal and Justice Affairs launched a consultation period to allow the public to comment on new regulations to reduce smoking in the Solomon Islands.

The new regulations would include printing large warnings on cigarette packets, requiring manufacturers to test and report on the toxic chemicals in cigarettes and providing further requirements for non-smoking areas.

Dr Cedric Alependava, Chairman of the Solomon Islands Tobacco Control Taskforce Committee says the new measures build on many steps the government has already taken to reduce the rates of smoking in the country.

‘The Tobacco Control Act was introduced back in 2010,’ Alependava says. ‘It stopped tobacco advertising, and restricted where people could smoke, like banning smoking inside hospitals, public transport and in schools.’

‘Most importantly it also banned the sale of cigarettes to children and we know from research that many people who start smoking in their teens become smokers for life.’

Only three and a half years later, Eoghan is still a non-smoker and has regained almost 90 percent of his lung function.

‘I’m fit now, I’ve run a couple of half marathons,’ he says. ‘I don’t get sick all the time, I feel energized.’

He has also made sure his workplace, the European Union offices in Point Cruz is a 100% no smoking environment.

Dr Juliet Fleischl, Representative for the World Health Organization in Solomon Islands, agrees that is an important step.

‘It’s not just about choosing to stop smoking yourself,’ she says. ‘It’s about recognizing that when you smoke around others, you’re taking away their right to choose whether or not they breath in toxic chemicals. People deserve that right, especially in their workplace.’

‘Of the 250 known toxic chemical in cigarettes, 69 can cause cancer,’ she says. ‘Good reason to give up for your health and the health of everyone around you.’

And as someone who went from ‘enthusiastic smoker’, through many attempts and failures, what advice has Eoghan got for other people trying to quit smoking?

‘I found that each time I tried to give up, it got easier,’ Walsh says. ‘Once you’ve done it once, you know you can do it. You just need to keep trying and make that decision to quit for the good of your health.’