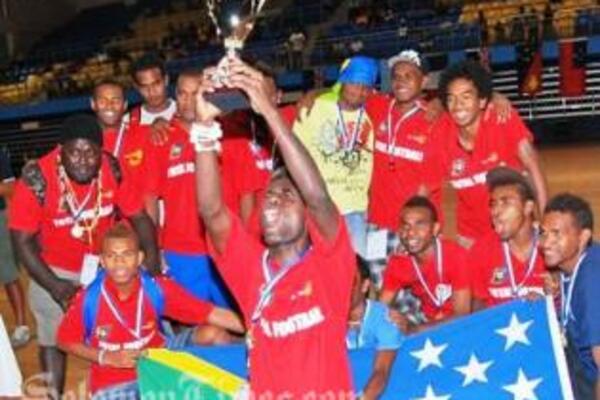 Kurukuru sensation Elliot Ragomo showed why he is one of the best in the region, scoring seven goals in his final match to claim the OFC Golden Boot Award just ahead of teammate Micah Lea'alafa.
Source: OFC
Share
Monday, 16 August 2010 09:00 AM

Dickson Kadau's side concluded the round-robin competition in style with a 21-2 win over Tuvalu which almost matched the tournament record of 23-1 set by the Futsalroos over Samoa back in 1996 when Australia was still part of OFC.

Kurukuru sensation Elliot Ragomo showed why he is one of the best in the region, scoring seven goals in his final match to claim the OFC Golden Boot Award just ahead of teammate Micah Lea'alafa.

Kadau says it was a team effort that took them to the title.

"The experienced players were all impressive but I have to say some of the youngsters also stood out this week. Coleman Makau was playing in his first OFC tournament and was particularly impressive."

In other action on day seven, Fiji beat Vanuatu 4-0 while New Caledonia upset New Zealand 6-4 to consign the Futsal Whites to third place behind the hosts on goal difference.

Ragomo, who was the first ever Solomon Islander to play Futsal as a professional with Playas De Castellyon in Spain, picked up the OFC Golden Ball Award for his outstanding performances throughout the week.

Tahiti's Atanui Tetihia meanwhile picked up the Golden Glove Award for best goalkeeper as he helped his side restrict the goals to just 16 - equal to table toppers Solomon Islands and Fiji.

The Tahitians also picked up the OFC Fair Play Award.

In 2011 the Oceania event will act as a qualifying tournament for the FIFA Futsal World Cup Thailand 2012. Next year's edition is scheduled to take place in May with a decision on the venue coming later this year.