Half a Billion Dollars: Unrest Damages Higher Than Initial Assessment 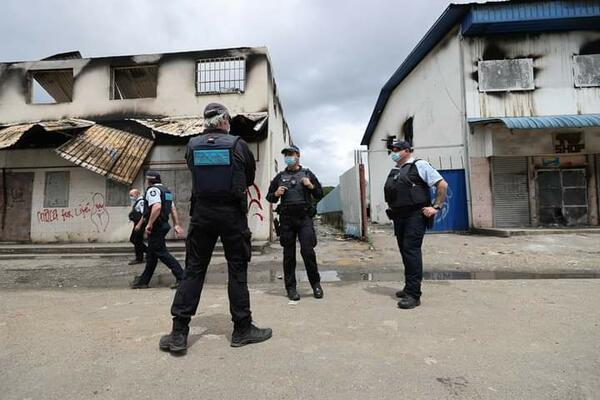 Damages to the building infrastructures through burning and looting are estimated to be around SBD$306 million.
Source: ADF
Share
Friday, 03 December 2021 14:26 PM

The Central Bank of Solomon Islands (CBSI) has updated its initial assessment on the cost of the damage of the riot on the local economy.

The extent of the adverse impact on the economy is extensive and estimated to have reached SBD$534 million, up from the SBD$227 million initially estimated.

There around 63 buildings being burnt and looted, revised up from the initial 57.

With this level of damage, CBSI says that economic growth for 2021 is now estimated to contract by 0.6%, with growth for 2022 expected to weaken subsequently. This reverses the positive 0.4% growth projected earlier.

CBSI says that the retail and wholesale sector, which accounted for more than 50% of the damage, is expected to fall by -3.5% in 2021 from a projected rebound of 1.3% forecasted earlier.

CBSI estimated that the total loss in the value of goods destroyed equates to around SBD$228 million; this is likely to exacerbate the already disrupted supply chain prevalent in the economy.

Damages to the building infrastructures through burning and looting are estimated to be around SBD$306 million.

Approximately around 1000 employees lost (or will lose) their jobs with an equivalent total loss in employment income estimated at SBD$1 million for the month of December.

Moreover, the spill-over effects of the riot into other sectors of the economy are significant and evident across the utilities, communication, transport, education, police and other services. These costs could not be quantified and verified in time for this report.

The Central Bank states that these economic consequences are expected to transmit into the already stretched fiscal operations. As a result, the government is expected to lose around 31% of its monthly revenue or a net loss of around SBD$80 million over the next three months.

The biggest loss to the government revenue stems from a monthly loss of around SBD$20 million in various tobacco taxes, which implies that in the near term the Government will lose around SBD$120 million.

Subsequently, the fiscal deficit is expected to deteriorate to around 5%-6% of GDP by the end of this year, 2021. With cash buffers already stretched, and a pessimistic revenue outlook, it will be a challenging fiscal task to maintain critical services and at the same time provide stimulus support to affected businesses in 2022 and beyond. More budget support or debt financing will be needed for this.

Higher imports and outward remittances in the coming months are expected with overall imports estimated to increase by SBD$26 million to SBD$330 million leading to the current account deficit widening by 3% of GDP by end 2021.

Inflation is projected to increase. CBSI earlier forecasted inflation to increase by 3% by year-end on the back of high fuel and food prices. The riot-induced impacts will result in inflation rising even further to 3.7% at end 2021 as unexpected food and tobacco shortages as well as demand and supply mismatches add to the already elevated price pressures.

The Non-Performing-Loans are also expected to rise as a number of businesses affected acquired loans from the Financial Institution, totalling SBD$43 million.

Dr Luke Forau, Governor of the Central Bank, adds that the recent riot further deepened the already weak and sluggish economy. The trajectory the country is moving in is in fact likened to ‘development in reverse’.