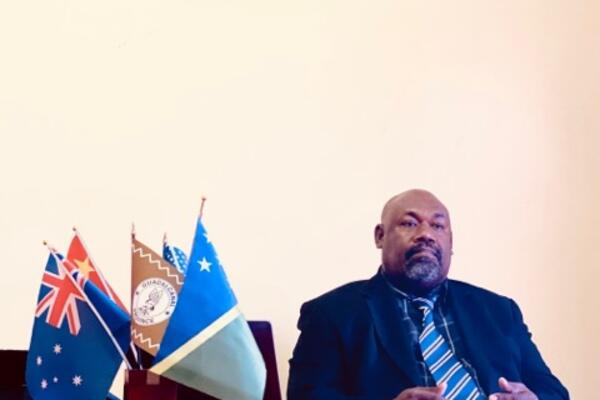 "These statements should be re-clarified to reflect the actual boundaries between Honiara City and Guadalcanal in accordance with several other laws..or if not then there should be an inclusion of ‘Guadalcanal Province’ along the same line in the first Order"
Source: Guadalcanal Province
Share
Tuesday, 05 May 2020 14:45 PM

The Guadalcanal Honorable Premier, Mr. Francis Sade, had voiced his frustrations and appealed to the National Government to correct the boundaries declared under the Emergency Powers (COVID-19) Regulations 2020 on March 27.

This came few days after the Premier first shared his frustration publicly on May 1 during an exclusive interview with Lifestyle Television Solomon (LTV) during its Special Report program.

“I am quite disappointed with the National Government for including part of the Guadalcanal Province as Honiara in the Emergency declaration zone. Those boundaries declared in the SOE are simply not Honiara, they’re Guadalcanal boundaries” Honorable Premier Sade explained in the interview.

In another meeting with his Management team yesterday at the GP Headquarter, Premier Sade stated that the overlapped boundaries continues to raise major concerns for some Guadalcanal Chiefs in the Poha Area which prompted them to question the process acquired and when the boundaries were made.

Premier Sade had stated "There is a huge scale of land being lumped under that statement, this is plain wrong...a mistake that now created sensitive issues amongst Guadalcanal chiefs in those particular areas, and now my government is obligated to explain it to the respected chiefs of Guadalcanal."

Therefore, "these statements should be reclarified to reflect the actual boundaries between Honiara City and Guadalcanal in accordance with several other laws...or if not then there should be an inclusion of ‘Guadalcanal Province’ along the same line in the first Order" he suggested.

Although the Premier acknowledged the National Government’s task under the Emergency Powers (COVID-19) Regulations 2020, the ambiguity of the statement in first Order remains a sensitive issue for people of Guadalcanal in those particular areas more than the coronavirus.

GP Media presumed that the overlapped boundaries indicated in the State of Emergency might be sighted and extracted from the proposed Greater Honiara Area (GHA) plan for urban expansion under the National Development Strategy 2035.

Needless to state, even that GHA has to go through the Guadalcanal Province Town and Country Planning Board before it can be further approved and eventuated.

Consequently, Premier Sade also reiterated that the current National Government must continue to consult his Executive on any issue concerning such decision which directly involves Guadalcanal Province rather than neglecting the major role that Guadalcanal Province plays in the political and development decision in the country.

In summary, the Honorable Premier stated that the State of Emergency nationwide statements should be edited as soon as possible in order to avoid public confusion for Guadalcanal indigenous people and further sensitivity issues.

Put differently, if State of Emergency's statement was done on purpose and continue to be perpetuated verbally, then the National Government should not use COVID-19 as an excuse to legitimize its force or as the 'power of exclusion' on any Guadalcanal land without prior knowledge of the Guadalcanal Provincial Government since these are two separated issues altogether.