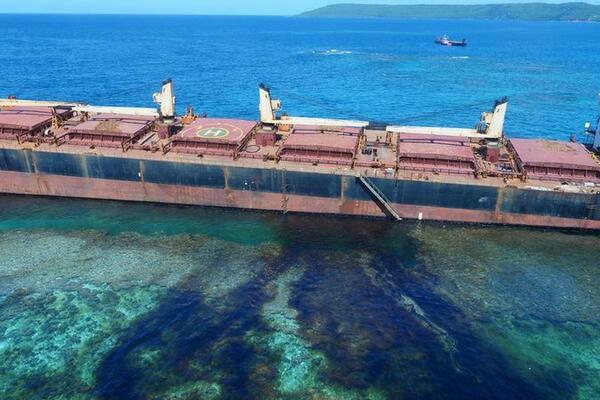 About 75 tonnes of fuel oil are understood to have leaked out of the stricken vessel already, creating a large slick that is creeping towards the UNESCO-listed southern stretch of Rennell Island, the world’s largest raised coral atoll.
Source: RadioNZ
Share
Friday, 01 March 2019 07:12 AM

Australia is helping to pressure a Hong Kong shipping company and several other firms to take responsibility for cleaning up a major oil spill close to a World Heritage-listed coral reef off the Solomon Islands.

The Sydney Morning Herald and The Age understands there is deep frustration within the Australian government over the refusal by the Hong Kong firm, its South Korean insurer and a Solomons mining firm to stem the flow of oil out of the large cargo ship, which ran aground more than three weeks ago.

About 75 tonnes of fuel oil are understood to have leaked out of the stricken vessel already, creating a large slick that is creeping towards the UNESCO-listed southern stretch of Rennell Island, the world’s largest raised coral atoll.

Yet the companies responsible for the mess are showing scant signs of stopping the leak, much less cleaning up what is fast becoming an environmental disaster, an informed source said.

“More than three weeks on from February 5, there’s been little evidence of any action of the companies involved to avert a disaster,” the source said.

“Those companies involved have had very little professional engagement with the Solomon government."

Pressure is now being put on the companies to “hold those responsible companies and their owners and insurers to account to meet both their commercial and their moral obligations”.

Australia has lately been on a push to consolidate its diplomatic relationships in its near Pacific neighbourhood amid concerns of growing Chinese influence and the worrying strategic implications that carries.

The Australian Maritime Safety Authority flew surveillance flights over the area that showed heavy fuel oil leakage into the water. That has begun to spread over the sea and shoreline.

The ship is believed to have about 600 tonnes of fuel still in its tanks.

The MV Solomon Trader, a 225-metre bulk carrier, was loading bauxite, the main rock used to make aluminium, off Rennell Island when Cyclone Oma drove it onto a reef on February 5.

The ship is owned by South Express Ltd, a Hong Kong-based shipping and charter firm. The vessel is Hong Kong-flagged.

It has been contracted to Bintan Mining, which is a Solomons-based firm registered in the British Virgin Islands. The ownership is murky, however. It is reportedly a subsidiary of Asia Pacific Investment Development Ltd.

The Solomon Star and Island Sun newspapers have both reported in the past on allegations of questionable relationships between the former government in the Solomon Islands and APID.

The insurer is South Korean firm Korea P&I. An Australian law firm, Thynne Macartney, is understood to be acting for Korea P&I but a woman answering the phone at the firm’s Brisbane offices declined to comment.

Australia is providing the Solomons government with technical expertise. An AMSA technical adviser was posted to Honiara, the Solomons capital. The Australian government has also readied equipment in the Solomons to stop the spill and clean it up if the companies don’t act.

It is understood the companies responsible have generally not even been responding to Honiara’s requests for help.

Korea P&I appears to have deployed a salvage crew but they haven’t formally told the Solomons government the extent of anything they are doing.