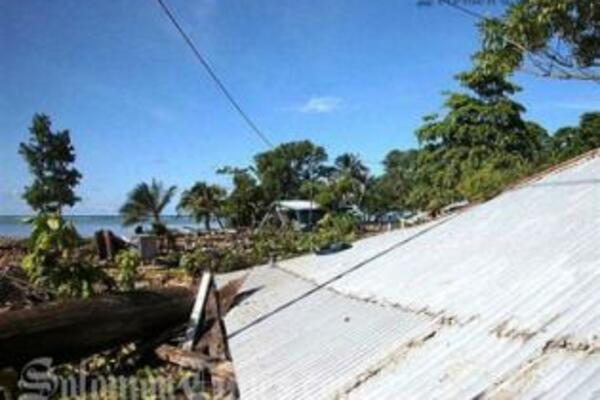 Ruins of the old Gizo hospital, washed away by devastating tsunamis in 2007.
Source: Photo Supplied
Share
Monday, 22 February 2010 08:18 AM

Construction of the new Japanese-funded Gizo hospital facility is ready to begin after a groundbreaking ceremony in the Western Provincial capital on Friday.

High level representatives from both the Solomon Islands and Japanese Governments joined Western Provincial leaders to officiate at the occasion.

The Japanese Government has injected a total of SB$126 million for the project, which is expected to enhance quality healthcare services in the western Solomons region.

Called the 'Gizo Number One' hospital, the new 60 bed double-floor facility will replace the former hospital which was devastated during the April 2007 earthquake and Tsunami that claimed at least 53 lives.

Once completed, the hospital will be the country's second Referral Hospital -which will provide services for Western, Choiseul and South Western parts of Isabel Provinces - a zone with an estimated population of more than one hundred thousand people.

It is also anticipated that the hospital will provide and upgrade existing services as well as new secondary health care services which have not been provided in the past.

Head of the national government delegation and Deputy Prime Minister, Fred Fono, praised the Japanese Government for the gift, describing it as a "noble gesture of the strong bond between Japan and Solomon Islands over the years".

Fono said the provision of regional hospitals will no doubt improve capacity and provide an alternative to the National Referral Hospital in Honiara.

For Many years, the people of Western Province have to spend a lot of money on travel to Honiara for medical treatments that were not available in the existing Gizo Hospital.

"I am certain that with the completion of this hospital, the people from this part of the country will not have to travel to Honiara anymore as medical services that they will require will be provided here in Gizo," Fono said.

Japanese Charge'd affairs, Akira Iwanade said the government of Japan believes the new facility will continue to improve healthcare and other social services in the Western Region. Mr Iwanade said Kitano Construction Company of Japan will build the facility with Japanese expertise to withstand future earthquakes and tsunamis.

He urges the Government and people of Solomon Islands to take ownership of the new hospital to ensure its proper management and sustainability.

"A new building alone is not sufficient; I would call upon all stakeholders, the government and people of Solomon Islands to take ownership of the facility on its completion. Ownership is fundamental to the management of the hospital's management and sustainable use,"

The road to get the project on the ground is tough for Provincial leaders and has taken a number of successive governments to negotiate amidst a lot of suffering and hardship further exacerbated by the April 2007 disaster.

"I must congratulate the people of Western Province for the patience and confidence you have in us. The occasion witnessed today is a humbling one and it reminds us that there is hope for a better future. It is a hard journey but it is full of hope and optimism," said Western Province Premier George Solingi Lilo.