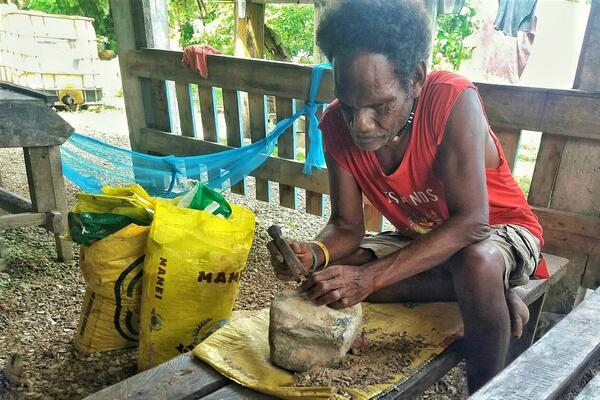 Shell money making is perhaps one of the most important cultural items in Melanesia. Langalanga, in Malaita Province, is among the few areas where shell money is still produced

Gregory Waina was six years old when he learnt how to make shell money.

The people of Langalanga are well known for their skill in shell money making. Gregory hails from Langalanga lagoon. His village is called Gwaedale.

He lost his wife six years ago and he has remained single till now. His wife used to help him in the past. Gregory continues to make shell money, alone, but he seems content. One cannot help but think, in some ways, perhaps he is holding on to memories. But Gregory says he is holding on to his identity.

“It is interesting as it is my culture and identity. I am now 50 years of age, but nothing is more fun than earning an income through shells”, Gregory says.

Shell Money was once Solomon Islands traditional currency. It is still used today for settling disputes, bride price and gifts.

"I usually send my products to the Central Market where there is high demand for these items. Even the price is good considering the process and the length of time it takes to make the shell money”, Gregory says.

Gregory works alone, while it is a passion for him he says it is also an important source of income.

"I faced a lot of challenges because I work alone. The least I can do is to work to the best of my ability to put food on the table”, Gregory says.

Sometimes he sells to families or buyers in the village at a lower price. This is for his other needs and wants.

"After all, this shell money business is really for me, just a single person," Gregory says.

He works seven days a week and it keeps him busy and since it is his passion, he does not see it as work, or gets tired of plying his trade day in and day out.

He usually buys shells from the Western province.

"Nowadays we ordered bag shells from the western province which is an additional expense”, he says.

He explains that some specific shells are now hard to find which is why he buys them from the western part of the country. Gregory is one who believes in his culture and tradition and is proud to be one of many that is still keeping it alive.