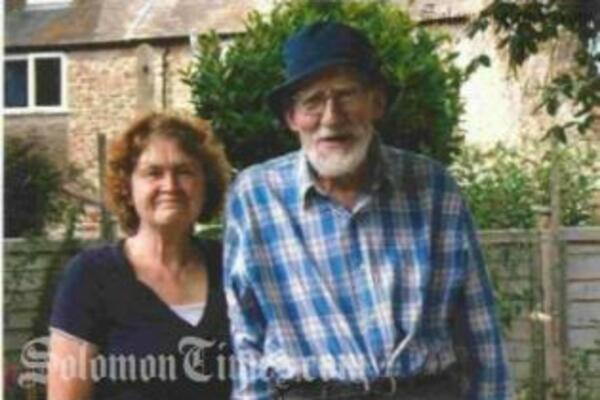 Pat McEvoy,69, will journey to the Malaita Province to put into place the John McEvoy Scholarship for Girls, which she has set up with her four daughters.
Source: dorsetecho.co.uk
Share
Thursday, 27 September 2012 08:19 AM

A United Kingdom grandmother will be travelling thousands of miles to give away scholarships to Solomon Islands youngsters in memory of her late husband who use to work in Malaita.

Pat McEvoy, 69, will journey to the Malaita Province to put into place the John McEvoy Scholarship for Girls, which she has set up with her four daughters.

She follows in the footsteps of the Duke and Duchess of Cambridge who proved a big hit when they visited the islands recently.

Mrs McEvoy is using funds she has raised locally to send seven or eight girls to secondary school.

The will be the first time Pat has visited the Solomons, a country where her husband lived and worked as a teacher and missionary for 18 years.

John McEvoy went to the islands in 1952 and was the priest in charge of Buma Mission Station and headmaster of a school for 400 pupils.

Mrs McEvoy said: "It will be emotional. I will make the journey by canoe down the Langa Langa lagoon to the village of Buma, because that is where my husband John lived and worked for almost 18 years before we met.

"John was, and is, remembered and loved by many on Malaita.

"He remained teaching in the UK all his life but he never forgot the people of the Solomon Islands. After John died in September 2009 I felt very strongly that I wanted to go to the Solomons to see where he'd lived and worked and go to his mission station at Buma, a place we'd heard so much about."

Mrs McEvoy, who has 13 grandchildren, will stay with John's former colleagues and the Bishop of Auki on Malaita.

She plans to make it possible for young girls in Buma and the surrounding area to go to the nearby secondary school at Dala.

She said: "Only 47 per cent of children in the Auki Diocese go to school, of these very few are girls.

"There is a saying 'educate a girl and you educate a nation' so with this in mind, my daughters and I have set up the John McEvoy Scholarship for Girls."

Money was raised for the scholarships at a series of fundraising events including a curry evening, coffee mornings, a quiz night and table top sales.

A third of the money raised by the parish's sponsored walk has gone towards the scholarship fund.

She added: "It costs only £50 a year to educate a child at secondary school but this is a lot of money for Solomon islanders.

"The people are poor, and education is not free."