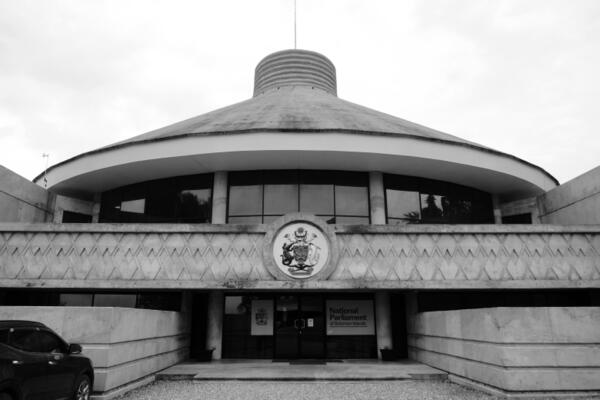 Mr Wale confirmed to local media that a letter was sent to the Governor General and he had already responded, saying the decision will be made on the floor of Parliament on Wednesday.
Source: Supplied
Share
Tuesday, 23 April 2019 09:29 AM

The Grand Coalition Group (GC) has questioned the legality of Manasseh Sogavare’s nomination ahead of the election of Prime Minister tomorrow morning.

It is understood Governor General (GG) Sir Frank Kabui will declare whether Mr Sogavare is eligible to contest the post or not.

This was revealed during a press conference over the weekend by Mathew Wale, the Prime Ministerial candidate for the GC, who had sought views from Governor General Sir Frank Kabui on the issue.

Mr Wale confirmed to local media that a letter was sent to the Governor General and he had already responded, saying the decision will be made on the floor of Parliament on Wednesday.

“Yes, we have written to him and he has acknowledged us on that concern but said he will have to look on that issue and any decision will be made on the floor of parliament during the PM’s election day,” he said.

Questions have been raised, particularly through social media, around the registration of Sogavare’s Our Party, which took place after the elections.

Our Party executive stated in a media statement that they followed due process in registering their members and claimed they are legally registered.

The Party says that they submitted their application to the office of the Political Parties Integrity Commission (PPIC), prior to the proclamation of the date for the national general election (NGE), as required under the Act.

However, upon submitting their application the Registrar of Political Parties position was still vacant as a result Our Party could not register.

After the appointment of the Registrar had been formalized, the Commission was unable to call a meeting to discuss the application because the announcement for the National General Elections had already been declared.

The Commission further agreed to meet at a later date following the elections to consider their application.

As a result members of Our Party had to contest as independents that were in coalition with Kadere Party as ‘Affiliates’.

“The Our Party executive eventually received the approval from the Commission after their meeting recently,” the statement reads.

Our Party has a total of 17 MPs- elect members and is headed by the Member of Parliament-elect for East Choiseul and three-time Prime Minister Manasseh Sogavare.