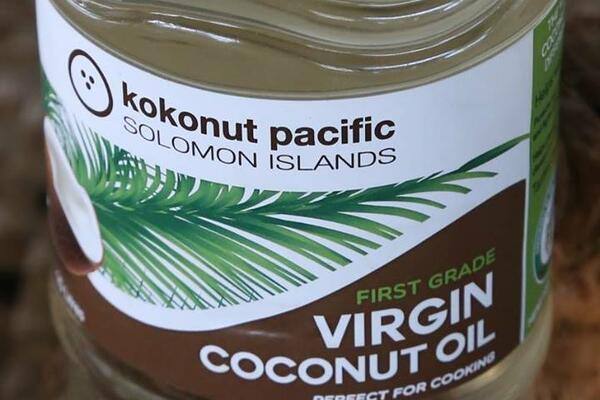 He says that such support will enable the company to purchase 75 tonnes of Virgin Coconut Oil (VCO) at SBD$24, valued at SBD$1.8m, of which SBD$670,000 will be paid directly to coconut farmers.
Source: The Pineapple Post
Share
Tuesday, 16 February 2021 08:44 AM

The Government has signed another agreement with Kokonut Pacific for an injection of a total of SBD150,000 under the Economic Stimulus Package initiative.

Speaking following the signing ceremony yesterday, Managing Director of Kokonut Pacific, Mr. Bob Pollard, expressed his appreciation and gratitude to the Government for the support towards his company.

Last year, the Government injected SBD$300,000 under the Stimulus Package into Kokonut Pacific. Mr. Pollard says that the company had used the support to raise the buying price of virgin coconut oil by SBD$6.

He says this has assisted the company with the production of 60 tonnes of virgin coconut oil, of which the company paid SBD$1.44m to rural producers.

“If it was not for the stimulus package, we would have only paid SBD$1.14m. The 60 tonnes have generated about SBD$1.56m in export revenues,” Mr Pollard stated.

At current export prices this will generate SBD$2.1m in export revenue.

Pollard also stated that without the subsidy the company will have to drop its prices which will slow production and reduce nut purchases from farmers.

Chairperson of the ESP Committee, McKinnie Dentana acknowledged that recipients of the ESP initiative such as Kokonut Pacific are the ideal recipients of the support because of their model of functioning as a company which deals directly with rural farmers as well as the international market.

Mr. Dentana confirmed that because of the positive outcome and the multiplier effects within the rural and the national economy of the initial support, the Committee sees it fit to provide additional support to KPSI so that virgin coconut oil trading continues to progress with our farmers.

This is the whole policy objective of ESP during these difficult times according to Mr. Dentana.

“We want to see our people have cash on their hands so that they can spend or save to able to meet their basic needs, while at the same time export trading is sustained,” he said.

Meanwhile, lists of recipients of cocoa and copra farmers have been finalised and will be uploaded into the public platform this week and onward.

The Government through the ESP Committee is fully committed to the accountable implementation of the ESP in the interest of wellbeing of the people, national stability and economic empowerment.