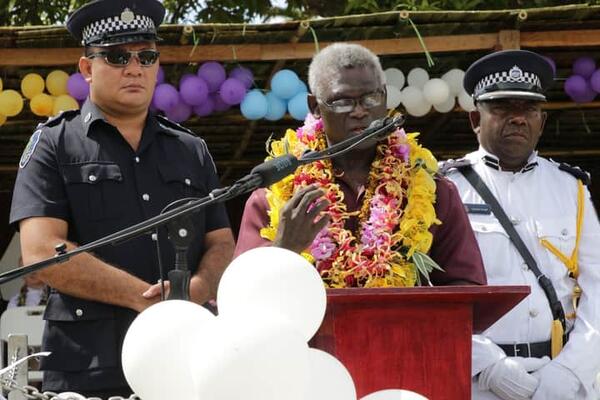 The Prime Minister acknowledged sentiments raised by the Premier of Guadalcanal province, for the Government to live up to its obligations under the now dismantled Townsville Peace Agreement (TPA).
Source: Supplied
Share
Friday, 31 July 2020 17:59 PM

The National Government is conscious of the issue of land and encroachment of settlers into customary land.

The Prime Minister acknowledged sentiments raised by the Premier of Guadalcanal province, for the Government to live up to its obligations under the now dismantled Townsville Peace Agreement (TPA).

And that is to establish an inquiry into the lost and abandoned customary land to determine how their occupants occupied them in the first place.

“This is an issue which is not taken up in any land policy by all governments since the former TPA was dismantled and its relevant requirements and issues distributed to line ministries to implement,” he said.

Prime Minister Sogavare said this is an area the National Government and the Guadalcanal provincial government need to work together to address.

The Prime Minister adds that the Government is also equally concerned about the sale of alienated land on Guadalcanal by foreign investors.

“Investors are supposed to invest money in this country and create employment for our people, not to sell land and take money out from this country. We have been far too lax for far too long. The security, welfare and future of our people and country take precedence over all other interests domestic or foreign,” he said.

The Prime Minister also emphasised that the focus of the DCGA Government is to get back alienated land that are not being developed.

“The next step is to discuss who will hold the PEs and FTEs. People come and go but the land will always remain. I believe the way forward is to devise a way where our people will perpetually benefit from our land,” he said.