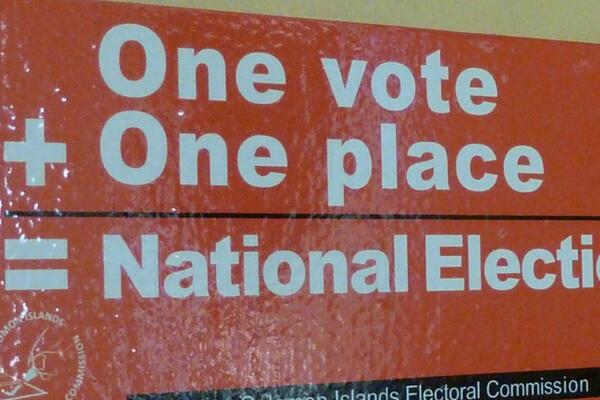 Voters from North East Guadalcanal and Central Honiara Constituencies will go to the polls on the 18th of November to elect their members of parliament.

The election date instrument was signed by His Excellency, the Governor-General, Sir. David Vunagi at the Government House and published in the gazette yesterday.

Chief Electoral Officer, Mrs Jane Waetara said that, signing of the By-Election Date legal instrument and its publication in the gazette initiates the 56 days election timeline to Election Day.

Nomination of candidates will start from 23rd September till 7th of October 2020. Candidates wishing to contest these by-elections are to see Returning and Assistant Returning Officers who will be stationed in respective nomination centres in the constituencies to receive nominations.

Both seats were left vacant as results of election petitions which were upheld by the high court following the 2019 National General Election.

The election campaign period now begins from the 22nd September to midnight on the 16th November, 2020, for these two by elections.

Mrs Waetara reminded voters, candidates and their supporters that campaigning outside the legal campaign period is an election offense with a hefty penalty.

Section 124 of the Electoral Act 2018 provides a maximum penalty of $20,000, or 2 years imprisonment or both for a candidate convicted of campaigning outside the campaign period.

Voters from these constituencies will go to the poll on the same day which is on the 18th November, 2020.

There is no voter registration update for these by elections; therefore, all voters registered for the 2019 NGE will remain as approved by the Electoral Commission.

Solomon Islands Electoral Commission would like to call on voters from North East Guadalcanal and Central Honiara constituencies and the interested public to check all available media outlets for more updates regarding by-elections for these constituencies.