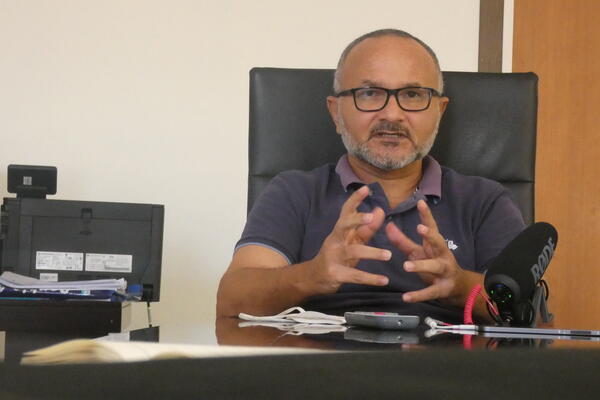 But the Opposition Leader says while such infrastructure projects are welcomed, promoting the Games as an economic booster is misguided, as it is a one-off event and cannot be sustained.
Source: Supplied
By Georgina Kekea
Share
Friday, 18 March 2022 10:29 AM

Mr. Wale made these remarks in response to the government’s optimism for an economic boost through the Pacific Games 2023.

Speaking recently in a Press Conference, Mr. Wale says the economy can only be boosted if the country is producing more in agriculture, fisheries and processed products.

The government said the 2023 Pacific Games is forecasted to become a major economic booster for the country and will not only invest more than SBD$1.5 billion dollars into the local economy but will also engage and employ up to 10,000 people.

The government continues that the Games is the principal driver of other major projects such as the Kukum Highway project, the international Airport project, the road network from Honiara City Council to White River, the Tina Hydro project, improvement projects in Honiara city and the markets development in Honiara and Guadalcanal province.

But the Opposition Leader says while such infrastructure projects are welcomed, promoting the Games as an economic booster is misguided, as it is a one-off event and cannot be sustained.

“When it ends then what next?” Wale questioned.

“We should be talking about the issues that will raise this economy and employ everybody in this country who wants and can work, should be able to get work, we have enough land, enough resources and we can do it but the government is not doing it. Hasn’t been doing it for a long time”, Wale said.

The 2022 Index of Economic Freedom ranked Solomon Islands 22 among 39 countries in the Asia Pacific region and its overall score is below the regional and world averages.

The index said the islands are rich in timber and undeveloped mineral resources but remain one of the region’s poorest nations. Most Solomon Islanders depend on agriculture, fishing, and forestry for part or all of their livelihoods, and the formal labour market is not well developed.

In its March Monetary statement, the Central Bank of Solomon Islands says the country’s economic growth is to contract by -7.3% in 2022 and does not expect economic activity to recover for at least a year due to on-going COVID-19 response measures and weak economic activities.

Speaking to the Press recently, Dentana said the main objective of the ESP in 2020 was to prevent the country’s economy from deteriorating.

He said in their first assessment towards the end of the year in 2020, the policy objectives of the ESP were met as the government was able to make sure the country’s economy did not contract to -4.5%. The government was anticipating a -4.5% contraction at the time. In 2020, a boost in the copra industry was attributed to the support provided by the government under its ESP policy.

But the Opposition Leader says implementation of the ESP could have been done better. He says that if the ESP met its objectives, the country should see a lot more of its impact now.

“But again, in fairness, it would be good to see the data”, Wale said.