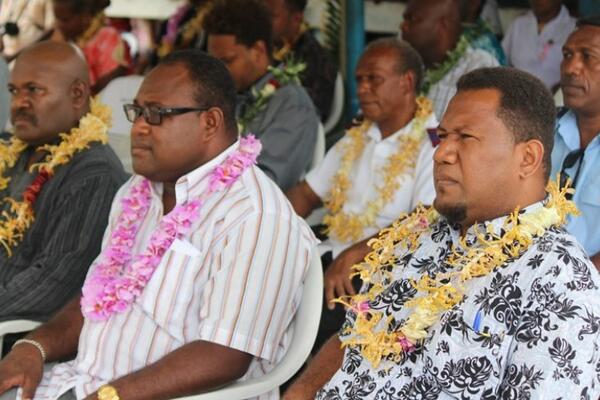 The Deputy Prime Minister (M) together with Malaita's Premier (L) and the Director for Health Services (R)in Malaita over the weekend.
Source: Office of the Prime Minister
Share
Tuesday, 12 August 2014 07:26 AM

Malaita Premier, Hon. Edwin Suibaea has applauded the Government for delivering a $2.9 million cheque towards the rehabilitation of Kilu’ufi Hospital.

The cheque was handed over to Kilu’ufi Hospital on Saturday by the deputy prime minister Manasseh Maelanga.

Mr Suibaea thanked NCRA on behalf of his government and the people of Malaita for the assistance.

“It is a gift to the Malaita people from a Government that is concern for its people,” the premier said.

The premier said when the Prime Minister Gordon Darcy Lilo and his deputy visited Kilu’ufi Hospital on Christmas Day last year; they pledged to provide funds for the hospital.

He said despite the criticisms levelled against the Lilo-Maelanga led Government; they have proved critics wrong.

Dr Namo said at first they thought it was only a political rhetoric. However, he said the handing over of the cheque has proved the commitment made by the Prime Minister Lilo and his deputy last year.

“I would like to thank the Prime Minister and his deputy and their Government for the timely assistance and I am sure people in this province will greatly appreciate this assistance as it will help to rehabilitate Kilu’ufi Hospital,” he said.

Hundreds of people in the nearby villages as well as doctors, nurses and patients came out to witness the handing over in which they also showed appreciation by thanking the deputy prime minister and his delegation that travelled to Auki over the weekend.