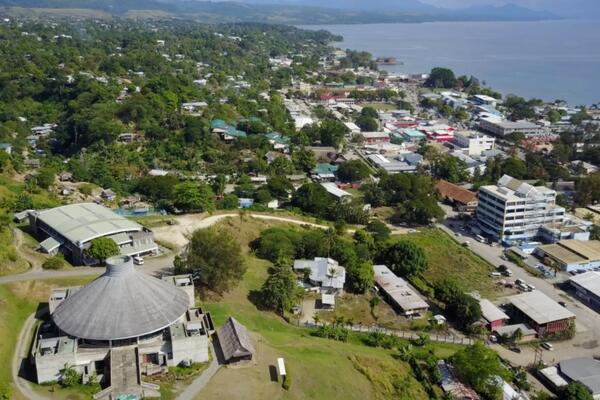 Sogavare in parliament says while DCGA is aware of the great need to bring in genuine investors, it also remains committed to protect its citizens with special attention to indigenous communities and resource owners.
Source: File: SBS
By Georgina Kekea
Share
Friday, 04 December 2020 08:05 AM

Prime Minister Manasseh Sogavare says the government is proposing an amendment to the constitution.

Speaking in parliament to conclude Sine Die, Sogavare says the amendment to the country’s constitution is to protect the ownership of the country’s resources.

“These will include a temporary restriction on the sale of land to foreigners by individuals, protection of indigenous peoples ownership over their traditional lands, relook at the customary land tenure system, introduction of the customary lands trust board, enacting provisions for free, prior and informed consent (FPIC) by ratifying and implementing the United Nations Declarations on the Rights of Indigenous People [UNDRIP (2007)]”, Sogavare says.

Currently, most land being sold to foreigners are by indigenous Solomon Islanders.

Permanent Secretary in the Ministry of Lands, Mr. Stanley Wale has recently said it is indigenous Solomon Islanders that are selling land to foreigners.

During a reception by the lands ministry to farewell two members of the land board, Wale says currently there is no more land left in Honiara to be sold as new grants.

“Most of the land now in foreigners’ hands are being sold to them by indigenous Solomon Islanders. It is us that gave our land away”, Wale says.

Sogavare in parliament says while DCGA is aware of the great need to bring in genuine investors, it also remains committed to protect its citizens with special attention to indigenous communities and resource owners.

“On those grounds, DCGA is proposing an amendment to our constitution to protect the ownership of our resources”, Sogavare says.