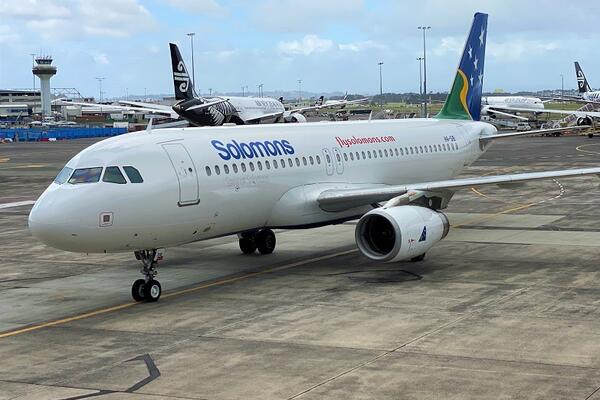 Rodgers says it will be much easier for the government to arrange the local airline to bring in the officials.
Source: Supplied
By Georgina Kekea
Share
Friday, 24 July 2020 09:23 AM

A charter flight is currently being planned to bring personnel from the People’s Republic of China (PRC).

Chairman of the National Hosting Authority, Dr. Jimmie Rodgers says consultations are underway to bring in 19 personnel from PRC as part of preparation work for the Pacific Games in 2023.

Rodgers says the government has been talking with the PRC.

He says the aircraft cannot do the long distance in one haul thus they will have to do a routing with one or two stops to and from China.

He says another option is for the officers to travel commercially but with the closure of international borders, traveling at this time of COVID-19 pandemic is proving to be very difficult.

Rodgers says it will be much easier for the government to arrange the local airline to bring in the officials.

“This will be a shared cost”, Rodgers says.

“If the airline can have a full plane of 144 seats, all the better”, he says.

He says they have agreed on a date and if the numbers are big then Solomon Airlines will give them a schedule and this will become a charter.

At the same time, Rodgers says quarantine measures will also be imposed.

He says the passengers are expected to fulfill the requirements on health checks.

“China is now not a risky country. China’s COVID situation has quietened down. The riskiest countries from our region are the Philippines, Indonesia, Singapore, Japan, Australia is getting up, so those countries are now into the high risk countries while China is now considered a low risk country”, Rodgers says.

PRC is the largest contributor towards the Pacific Games 2023 project. The NHA has secured a landmark agreement with the PRC to fund facilities that are worth over US$100 million.

The Pacific Games 2023 project is also said to be the largest-ever development corporation project the PRC has undertaken in the Pacific Islands.

“The Chinese government has appointed Central South Architect Design Institute (CSADI) to design and manage the delivery of the national stadium and six other sports facilities including the aquatic centre, the tennis courts, a training track and field, a multipurpose hall, a hockey field, and a 1,200 square meter administration complex”, Prime Minister, Manasseh Sogavare says in his statement at the opening of the NHA office.

Sogavare says PRC is committed to complete all the facilities they agree to finance and hand these over to the national Hosting Authority no later than June 2023.