Government May Look to Air Niugini for Philippines Repatriation Flight 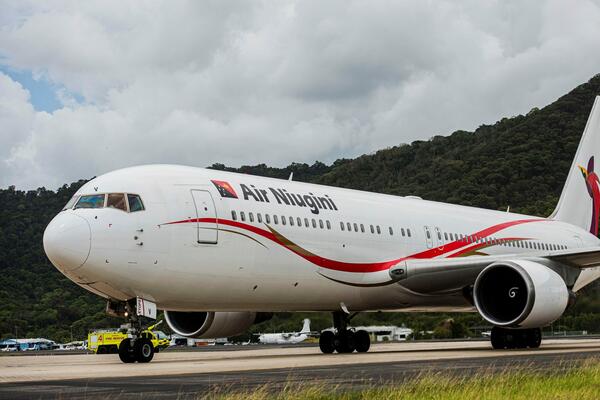 “Definitely the second flight will go but we will look at options to bring them on a larger aircraft”, Rodgers says.
Source: Air Niugini
By Georgina Kekea
Share
Thursday, 01 October 2020 08:31 AM

Government will possibly turn to Air Niugini for the next repatriation flight for students from the Philippines.

Secretary to Prime Minister (SPM), Dr Jimmie Rodgers says after the first repatriation flight, the government will now relook at the options available for them.

“The fact that not every one of them came on the first flight has created a jigsaw puzzle for us”, Rodgers says.

123 students were to board the first repatriation flight but 27 were disallowed from boarding the plane, due to visa issues. Only 96 students arrived on the flight.

Currently 305 are yet to be repatriated. This includes 11 infants.

“Definitely the second flight will go but we will look at options to bring them on a larger aircraft”, Rodgers says.

He says the priority for the government now is to bring back the students from the Philippines.

Chief of Staff in the Office of the Prime Minister, Robson Djokovic says the students in the Philippines are faced with a lot of issues especially with visas.

“Yes, the Foreign Affairs did send a diplomatic note and a request through the Philippines embassy in Papua New Guinea asking for consideration of our students who were booked on the first flight.

“There was a response from the Philippines government saying they have endorsed that and that was by way of a formal note by the Ministry of Foreign Affairs. When the students arrived at the airport the Philippines immigration told them that they could not leave the country. It is an internal matter in the Philippines”, Djokovic says.

He says the Solomon Islands government and the Foreign Affairs did everything that they could in their power to assist with the facilitation of the students' travel.

The visa for the Philippines costs around $37 USD. Processing fees can range from $20 USD to $60 USD.

Under the SIG scholarship, the government is responsible for allowances, tuition and flight tickets while visa and passport are the responsibility of the students.

Considering the situation in the Philippines it was quite difficult for the students to move around to sort out their immigration issues.

It is hoped the students traveling issues are sorted out so that they can be able to return to the country.