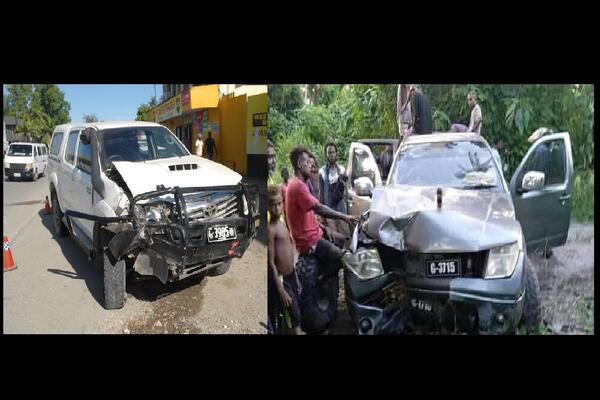 Superintendent Satu in a press statement says the driver of the vehicle was taken to Central Police Station watch house, arrested and placed in police custody.
Source: Facebook
By Georgina Kekea
Share
Monday, 19 April 2021 08:40 AM

Two government vehicles were caught in separate traffic accidents over the weekend.

While the government is looking at minimising costs, it is yet to curb the misuse of government vehicles under public officers' care.

Well placed sources say they saw the driver of the white hilux with the vehicle at the Club Flamingo in Chinatown in the early hours of Saturday. The driver was said to be intoxicated.

The local police’s national traffic center says they are investigating the traffic accident involving a government owned white Toyota Hilux opposite the Solomon Motor gas station in Honiara on 17 April 2021 while there were no formal reports yet on the second accident on the outskirts of west of Honiara.

Director of the National Traffic Department Superintendent Fredrick Satu says, “The Hilux was travelling in the easterly direction when approaching towards the Yacht club intersection opposite to Solomon Motor when the vehicle accidently veered off road by climbing up the middle lane island and crashed onto an electric street light.”

The hilux was allocated to the Ministry of infrastructure Development but used by the National Emergency Operations Center as a delivery vehicle for those in quarantine.

Meanwhile Superintendent Satu in a press statement says the driver of the vehicle was taken to Central Police Station watch house, arrested and placed in police custody.

The Public Service Act clearly stated that all government’s vehicles and plants shall be held under the charge of the permanent secretary.

The increasing number of traffic accidents by government officers are becoming a concern for the general public. Many have taken to social media to share their grievances saying this is a waste of taxpayers money. Some questioned whether the officers are also eligible to garage the vehicles overnight. A former government officer implicated in such an incident in the past says the government must be fair when executing their orders.

10 years ago, the number of government vehicles through its fleet at MID was 450. The cost of such a hilux caught in the accident would have been more than SBD$200,000. Most government ministries are expected to minimise costs as alluded to in ministers comments in parliament on the budget.