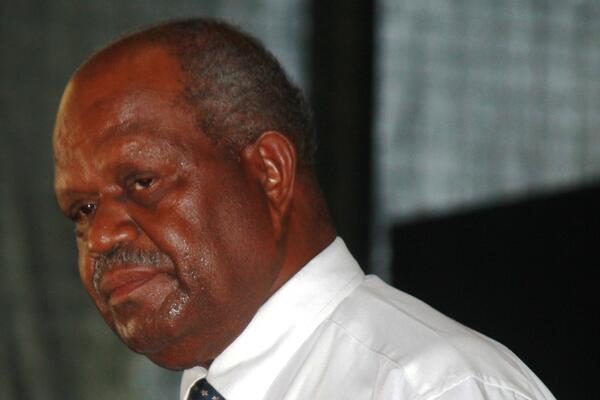 “Following the revocation of the knighthood by Her Majesty, Queen Elizabeth II on 24th November 2016, Kemakeza will no longer be referred to as ‘Sir’,” a government statement said.
Share
Tuesday, 19 March 2019 07:21 AM

Former Solomon Islands Prime Minister Allan Kemakeza has already lost the knighthood title he was awarded in 2001 and should not be referred to as “Sir Allan” again.

The Government House clarified this on Saturday, following recent references by the media to Kemakeza as “Sir Allan”.

“Following the revocation of the knighthood by Her Majesty, Queen Elizabeth II on 24th November 2016, Kemakeza will no longer be referred to as ‘Sir’,” a government statement said.

“A notice has been published in The London Gazette stating that Letters Patent have passed the Great Seal of the Realm cancelling and annulling the knighthood,” it added.

The Committee recommended revocation of the Kemakeza’s knighthood based on the ground that he had been criminally charged and convicted by the Magistrate Court, and affirmed by the High Court in 2008 on appeal for three criminal offences.

Following his 2008 appeal, Kemakeza was sentenced to 18 months imprisonment, of which 12 months was suspended while he served 6 months in prison.

Kemakeza was informed about the revocation in a letter dated 11th January 2017, and hand delivered to him on 2nd May 2017.

“Therefore, the knighthood is now removed from Allan Kemakeza, and he will no longer be referred to as ‘Sir’,” the statement explained.

Kemakeza was knighted on 16 June 2001 after he became prime minister. He was MP for Savo-Russells Constituency at that time.

He lost the seat in the 2010 elections, but MPs later elected him to be the Speaker of Parliament, a position he held for one term.

In the upcoming election, he will contest the North West Guadalcanal seat against three other candidates.

This is the first time for Solomon Islands for a knighthood to be revoked.

Some former leaders from other Commonwealth countries have also been revoked of their Knighthood under similar circumstances.

One example was the revocation of the Knighthood title of Anthony Blunt in 1980 over an allegation of being a member of a spy ring.

Although he was never being charged and convicted, his Knighthood was withdrawn on the advice of the Prime Minister.

In the Pacific, Albert Henry of Cook Islands had his Knighthood withdrawn on the ground of a court conviction on an electoral fraud.

In Australia, Terry Lewis, a former Commissioner of Police in Queensland had his Knighthood title withdrawn on the basis of a court conviction of corruption and fraud.

In Zimbabwe, former President, Robert Mugabe also lost his Knighthood as a result of his dictatorship rule in his own country.