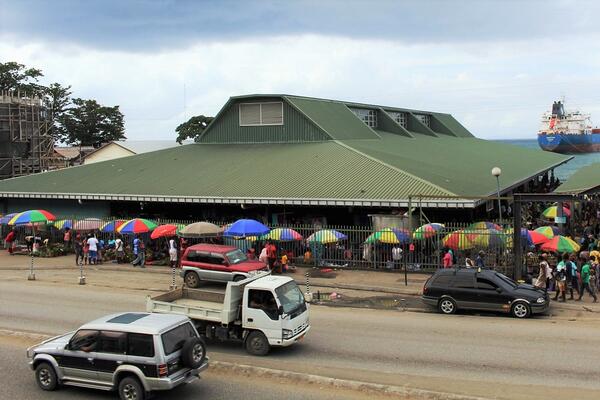 The proposed markets are aimed to minimise overcrowding at the Central Market during the 2023 Pacific Games.
Source: File: SIBC
Share
Thursday, 15 April 2021 09:41 AM

The Government will build a market facility at the eastern side of Honiara City, Alligator Creek area.

Minister for Provincial Government & Institutional Strengthening (MPGIS) Hon Rollen Seleso told Parliament this week that this is part of the Government’s plan in preparation for the 2023 Pacific Games.

Minister Seleso said the Government through the MPGIS, in collaboration with Guadalcanal Province, plans to build a proper market facility that can accommodate vendors from the Eastern side of the Honiara City.

“We hope that the Ministry will commit itself into this important project to ensure our sellers and customers do have better access to these market facilities,” he said.

Mr Seloso on behalf of his ministry and the Guadalcanal Provincial Government thanked the National Government for supporting this project.

He said the allocated budget for the Alligator Creek market is $1.5M.

The Minister said his ministry has already initiated consultations with the Guadalcanal Province and other stakeholders.

“A working committee has already been set up, and that costs estimates and a draft plan for the market is already secured,” he said.

Minister Seleso said as soon as the 2021 budget is passed, the Ministry with other stakeholders will kick of the necessary process, to ensure that the infrastructure is built on scheduled.

Meanwhile, Minister Seleso said as for the Poha-Mamara Market on the Western side of Honiara, his ministry will consult with engineers and planners of the Mamara Township through the responsible agencies to discuss ways in which another market facility can be accommodated on that proposed site.

The proposed markets are aimed to minimise overcrowding at the Central Market during the 2023 Pacific Games.