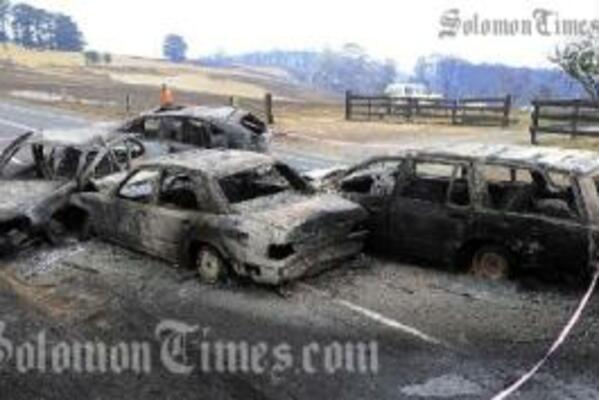 The Solomon Islands government has handed over half a million Solomon dollars to the Australian High Commission in Honiara this morning to support the fire victims of Australia.

The money was handed to the Acting Australian High Commissioner, Alison Duncan at nine o'clock this morning by the Permanent Secretary of Home Affairs and Chairman of the National Disaster Council Fred Fakarii.

Mr Fakarii told Ms Duncan that although the support was very small compared to the ongoing support her government is giving to strengthen disaster management activities in Solomon Islands it is nevertheless "a small token to show that SIG is sorry and sad over the loss of lives and properties in the Victorian fires in February this year."

"Please accept this small token of support on behalf of the government and the people of Solomon Islands," Mr Fakarii told Ms Duncan.

The February Victorian fires destroyed 1800 homes and claimed over 200 lives.

Meanwhile, Mr Fakarii also revealed through a media statement that the SIG is also contributing another half million dollars to the flood victims of Fiji this week.
Mr Fakarii said the money is now with the Ministry of Finance to deposit into the Fiji government Disaster Account.

The Home Affairs PS and NDC Chairman said these contributions are from the government to show its support albeit small for its regional neighbours.

Mr Fakarii also clarified that the donations are separate from those raised in several fundraising activities organised by the Honiara Hotel and partners earlier on for the same purpose.

He said the SIG already donated SBD$250,000 dollars to those fundraising activities.