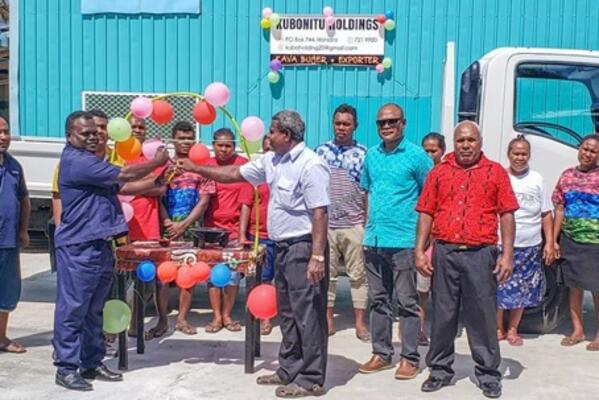 The Government this week delivered an Isuzu 3-tonne pick-up truck to local buyer and exporter of Kava products, Kubonitu Holdings.

This is as part of the Democratic Coalition Government for Advancement (DCGA)’s Economic Stimulus Package (ESP) initiative.

Chairperson of the Economic Stimulus Package Oversight Committee and Permanent Secretary of the Ministry of Finance and Treasury Mr. McKinnie Dentana handed the keys to the new vehicle, to owner of Kubonitu Holdings, Duddley Longamei during a low- key ceremony this afternoon.

In receiving the support, Longamei expressed his gratitude to the National Government for its recognition of the need of the company.

He stated that the support provided under the ESP initiative is a boost for the company.

He also stated whilst this support will benefit the company, this also goes a long way in meeting the needs of local farmers around the country, who sell their kava products to the company.

“We are also very proud to support this project, this is for the betterment of our nation, especially of our local exporters and our local farmers who will benefit in their own way and contribute positively to our economy.”

Mr. Dentana further stated the interest of the Government to see local farmers and exporters expand their areas of interests which in will benefit themselves and the country as a whole.

Dentana revealed that the Government under the Economic Stimulus Package also injected cash into Kubonitu Holding to help the company buy kava from farmers around the country.

Kubonitu Holdings is a locally-owned company that buys kava products from local farmers and exports to international markets such as the United States.

Mr. Dudley revealed that of the support his received from the Government, he anticipated to export 10 metric tons or 1 container of Kava in August.

This will be first in history for Solomon Islands to export Kava in containers.