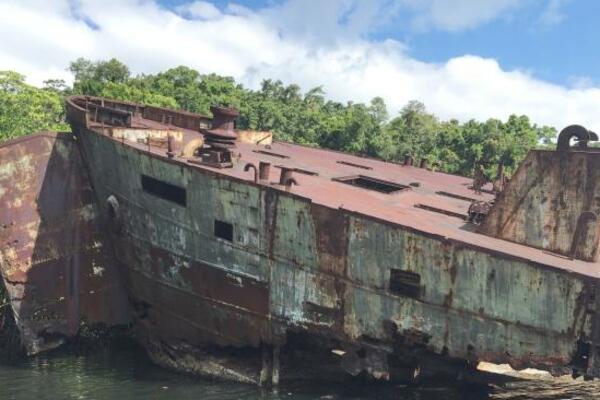 The treasure was believed to come from a Japanese cargo ship that had long been the subject of a search.
Source: Photo supplied
Share
Thursday, 03 November 2016 09:29 AM

The Government has reportedly paid SBD$500,000 for a treasure hunt led by Dr Reginald Apia.

Seven months ago Dr Apia salvaged what he claimed to be gold bars, which was later confiscated by government officials and was said to have been stored at the Central Bank.

The treasure was believed to come from a Japanese cargo ship that had long been the subject of a search.

Many Japanese cargo ships and fast warships were sunk as they struggled to resupply — and evacuate — its besieged forces before the region was recaptured by the allies.

Experts from the Ministry of Mines and Energy had confirmed that the supposed treasure was not gold, but just a mixture of iron and lead.

In a statement today, the Opposition Group says SBD$500,000 is massive and such an amount could have been used for other worthwhile services to the people of Solomon Islands instead of paying for a treasure hunt fairytale.

"Why should the Government support this when the Government itself through the Ministry of Mines & Energy, on March 09 2016, has already confirmed that the suspected gold bars salvaged from a sunken ship in the Malaita Outer Islands were not gold or metal of any value," the statement reads.

The Opposition Group says that it is of great concern that the Prime Minister of this country should be involved in such dubious activities, and that he could be easily misled.

"The Prime Minister must exercise extreme care not to allow his government down the path of another financial scam to the embarrassment of the nation," the Opposition Group warned.