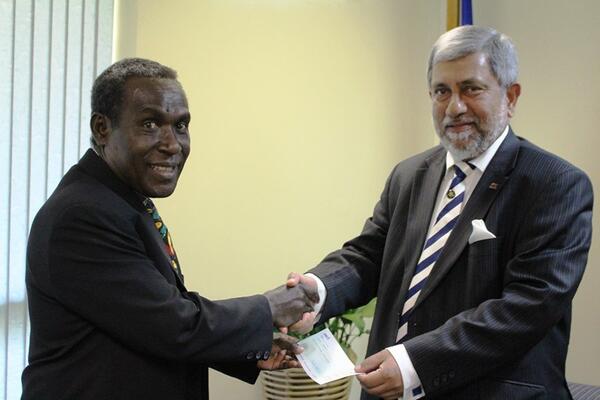 The funding is to support the rehabilitation, resettlement and reconstruction programmes underway in Solomon Island after the last month’s devastating cyclone and flood water damage.

Mr. Robert Iroga, Chief of Staff of the Prime Minister and Mr. Ranjith Hewagama, Honourary Consul- designate in Solomon Islands were present at the meeting.

The Prime Minister of the Solomon Islands conveyed his profound gratitude for the donation and appreciated the kind gesture of President Mahinda Rajapaksa to support the people of Solomon Islands in their hour of need.

The Prime Minister Lilo conveyed his best wishes to President Rajapaksa and the people of Sri Lanka and emphasized the value of this strong friendship between the two countries.

High Commissioner Samarasinghe also called on the Minister of Foreign Affairs, Clay F Soalaoi and the Secretary/Foreign Affairs Mr Beraki Jino who were also very appreciative of the kind gesture of the cash donation from Sri Lanka.