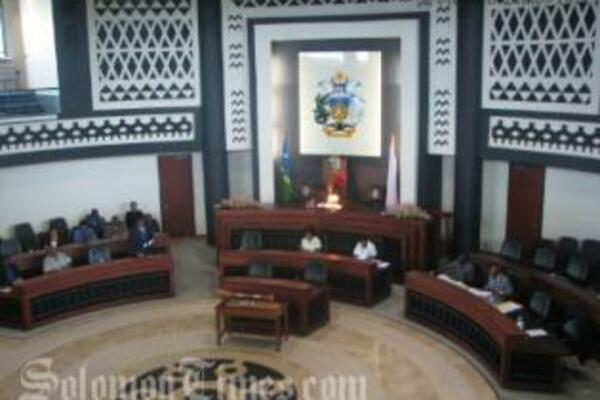 With deteriorating revenue collection, the Government has announced a further 10% reservation on its 2009 Recurrent Budget across the board on all ministries.

This is in addition to the 25% reservation which the Government has already placed on other charges until the end of September 2009 in a bid "to control over-commitments" by the Government.

The reservations on the 2009 Budget were announced by the Finance Minister Snyder Rini in response to a question raised in Parliament on Monday by the Opposition Leader Manasseh Sogavare.

Mr. Sogavare wanted to know what control measures were being placed on the implementation of the 2009 Budget.

Finance Minister Rini said that the measures were part of a 'Broad Policy Response Strategy Package' formulated by the Government to address the challenges brought about by the impact of the current global economic crisis.

Apart from the 35% reservation on spending, the Government has also put on halt all recruitment on all posts not yet advertised and halting the creation of any new positions.

The Government has also re-prioritized its 2009 Development Budget, but would only spend on ongoing projects that can directly improve economic growth but not initiating any new projects due to lack of funds.

Minister Rini also said that arguments that the Government should spend more to stimulate economic activities have gone to show that many do not appreciate the extent of the deteriorating economic situation seriously affecting government revenue.

Despite the difficult situation, Mr. Rini said the Government continues to fund priority commitments, particularly Government payroll which costs about $10 Million a week, as well as education and provincial grants.

Minister Rini said that on top of ongoing priority expenditures, the Government has been able to spend $11 Million towards assisting victims of Guadalcanal flooding and king tides affecting parts of Malaita and elsewhere in the country.