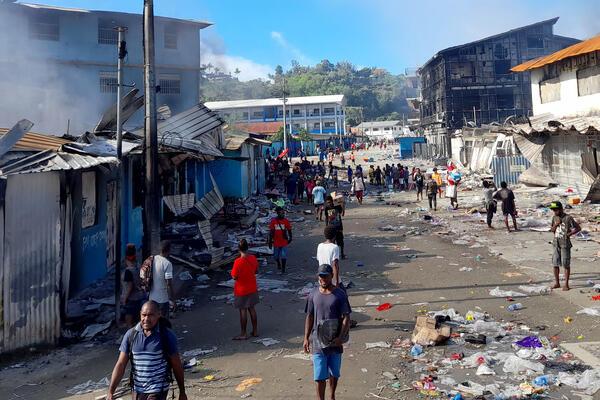 The Central Bank of Solomon Islands (CBSI) says that the extent of the adverse impact on the economy is extensive and estimated to have reached SBD$534 million, up from the SBD$227 million initially estimated shortly after the riots.
Source: File: NBC
Share
Tuesday, 16 August 2022 10:27 AM

The government has confirmed that an amount of SBD$125 million has been allocated to assist businesses affected by the 2021 November riots.

Minister of Finance and Treasury Hon Harry Kuma made the formal announcement in Parliament on 8 August 2022.

Minister Kuma said a sum of SBD$125 million was allocated in this year’s budget to support businesses that were destroyed, burnt and looted during the unrest.

The implementation mechanism to assist affected businesses has two parts.

The first part, which will be managed by government through its agencies, includes, possible import duty and goods tax exemptions on imported materials, machinery for construction, equipment or restocking goods to businesses committed to resume operations.

The second will look at possible tax relief on a case by case basis on possible rental relief for affected businesses, stamp duty exemption on mortgages if businesses seek additional financial support from commercial banks and options for possible cash grants. Kuma says that the second component will be managed through commercial banks including the Development Bank of Solomon Islands (DBSI).

He says other possible relief may include interest payment on existing loans up to six months for affected businesses, concessional financing which includes special products with the Development Bank of Solomon Islands to support affected businesses wishing to rebuild their properties and restock.

The Finance and Treasury Minister confirmed that a technical team is formulating the guideline which will administer the two implementation components.

The Central Bank of Solomon Islands (CBSI) says that the extent of the adverse impact on the economy is extensive and estimated to have reached SBD$534 million, up from the SBD$227 million initially estimated shortly after the riots.