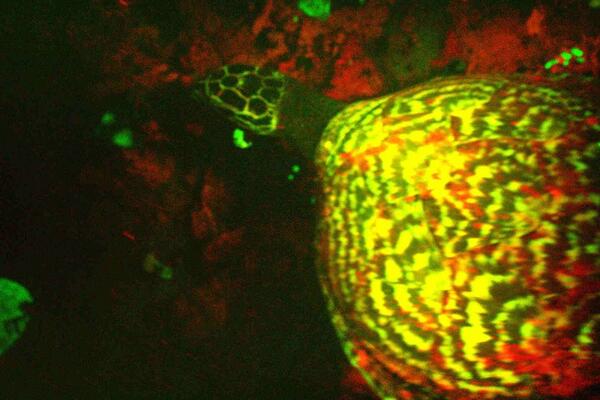 The discovery of the Hawksbill turtle species in the region of the Solomon Islands is the first of its kind.
Source: National Geographic
Share
Monday, 22 July 2019 08:02 AM

Marine biologists have discovered a species of glow-in-the-dark turtles that have an unusual biofluorescence capability.

The study of bilflourescence is only about ten years old, and scientists have discovered some incredibly common factors in many things like plankton, algae and numerous fish.

The discovery of the Hawksbill turtle species in the region of the Solomon Islands is the first of its kind.

National Geographic broke the story of the discovery with some amazing footage of the turtles changing colours.

Marine biologists David Gruber and Alexander Gaos told National Geographic they discovered the turtles on a night dive while in the Solomon Islands.

The biologist team has no real answer why the turtles possess this unique feature – other species typically use it to communicate with one another or, oddly, as camouflage.

Although it is too soon to say, Gaos told National Geographic that corals are often biofluorscent and the turtles may possess this unique feature to blend into their environment.

In an interview with the Daily Dot, Gruber said that after discovering the Hawksbill’s fluorescent capabilities, he took a closer look at the ‘loggerhead turtle’ and found it was able to create the same fluoresces as well.

The next step to understanding more details of their capabilities, the biologist team will look into the eyes of the glow-in-the-dark turtles to see if they can actually see the fluorescent colors that each one creates.

The team will also look into the chemical reaction within the turtles and see what is causing the fluorescence.

“It is very exciting, as sea turtles live in a blue ocean, which is the perfect light environment to excite the fluorescent molecules and cause them to give off light in other colors,” Gruber said.

“We are finding biofluorescent marine life to be much more widespread than we ever imagined.”