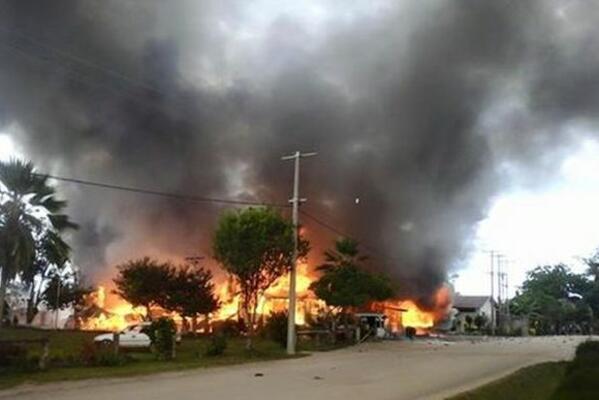 Gizo hospital during the fire in July this year.
Source: radionz.co.nz
Share
Monday, 19 September 2016 07:12 AM

The discovery of previously unknown asbestos after a hospital fire in Solomon Islands has sparked a call for a Pacific-wide ban of the toxic substance.

Gizo Hospital, in the country's west, had been cleared of asbestos in a study carried out by the Pacific Community's environmental programme, SPREP, prior to the July fire.

But local inspectors identified asbestos, which is dangerous when it becomes airborne, after the fire destroyed much of the hospital.

A SPREP team identified materials used in recent renovations as the likely cause of the contamination.

"Altogether on the Pacwaste project we are spending about $3.5 million on the asbestos project and probably about $2.5 million on physical intervention.

"But it is a drop in the ocean because that is quite small compared to the total cost of asbestos removal in the Pacific, which we gauge would be around US$150 million"

Asbestos is not banned in any Pacific country, and New Zealand is only bringing in an asbestos ban later this year.

According to the World Health Organization (WHO) asbestos related diseases are responsible for more than 100,000 deaths each year.

The topic of a Pacific-wide ban on the import of asbestos products will be raised at a SPREP meeting in Niue later this month.