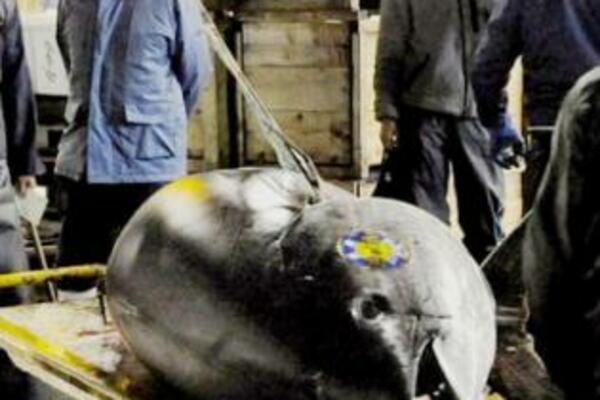 The record-setting price translates to a whopping USD$526 per pound.
Source: buzzbox.com
Share
Thursday, 06 January 2011 09:42 AM

A giant bluefin tuna fetched a record USD$396,000, in Tokyo on Wednesday, in the first auction of the year at the world's largest wholesale fish market.

"It was an exceptionally large fish," said the official, Yutaka Hasegawa. "But we were all surprised by the price."

The massive tuna was bought and shared by the same duo that won the bidding for last year's top fish: the owners of Kyubey, an upscale sushi restaurant in Tokyo's Ginza district, and Itamae Sushi, a casual, Hong Kong-based chain.

Reporters thronged Hong Kong entrepreneur Ricky Cheng after his big win, which reflects the growing popularity of sushi around the world, particularly in Asia.
"I was nervous when I arrived in Tokyo yesterday, but I am relieved now," he said after the auction, which began shortly after 5 a.m.

The giant tuna, caught off the coast of northern Japan, was among 538 shipped in from around the World for Wednesday's auction.

The record-setting price translates to a whopping USD$526 per pound.

Japan is the world's biggest consumer of seafood, with Japanese eating 80 percent of the Atlantic and Pacific bluefin caught. The two tuna species are the most sought-after by sushi lovers, and unfortunately is facing decline.

"It is quite impressive, and that really is the kind of profits some of these foreign fleets are making," said a fisheries official.

"The important thing for us now is to see how best our country can retain some of these huge profits, which is close to USD$4 Billion annually."

In an attempt to rescue the region's declining bigeye and yellowfin tuna stocks, eight tuna rich Pacific Island Countries known as the Parties to the Nauru Agreement (PNA), which includes the Solomon Islands, has initiated a "no-take zone" banning purse seine fishing from 4.5 million square kilometres over five areas of Pacific waters.

The new ban will be enforced through licensing agreements granted to tuna fishing vessels.

"We congratulate the PNA for its vision in protecting our Pacific from wasteful purse seine fishing. This is an historic moment for the Pacific, its marine life and its people's futures," said Lagi Toribau, Greenpeace Australia Pacific oceans campaigner.

"For years, these countries have tried to protect their tuna through political means at the regional tuna commission, but foreign fishing nations stood in the way of progress to save our oceans. It is important for the people of the Pacific region to control their own destiny and move towards a future of sustainability and economic prosperity with such a bold vision."