Get Into Rugby Festival A First for Honiara 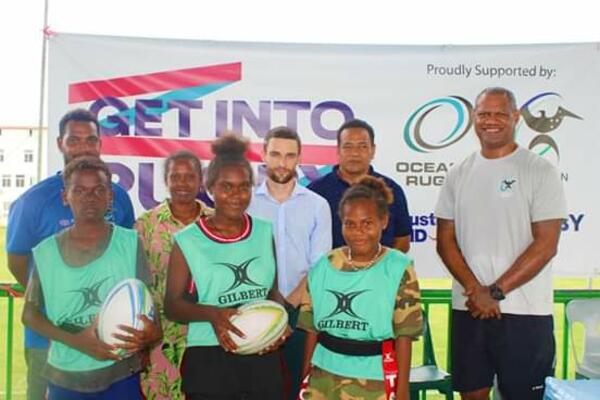 The Get into Rugby National Tag Festival was officially launched on Tuesday 10th December 2019, at the Town Ground Stadium, Honiara.

The Get Into Rugby programme, supported by the Australian Government, is part of the World Rugby strategy to grow the Game globally in partnership with our member Regions and Unions.

From 9 am on Wednesday 11 and Thursday 12 December, around 200 girls and boys between the ages of 9 to 17 years from East to West Guadalcanal will converge at Town Ground, Honiara for a “Tag Rugby Festival”. The interest so far has been unprecedented and encouraging given the intention to hold the festivals on a six monthly basis.

The organizers are appealing to parents and their children to come out in numbers to support the program and introduce your children to the wonderful game of rugby.

Speaking at the launch, Solomon Islands Rugby Union Federation (SIRUF) Deputy President Mr Adrian Tuhanuku stressed the importance and significance of such initiatives, particularly in creating pathways for young girls and boys in the Solomon Islands.

“We have a big opportunity to harness the zeal and energy amongst young people and teach them from a young age. It is also part and parcel of the bigger support via the Australian Government through its funding of the the Get Into Rugby Plus (GIR Plus) program which we were pleased to be included in when Prime Minister Scott Morrison visited here in June and made the announcement” said Mr Tuhanuku.

“This festival is just the beginning of a series of programs designed to spread the interest of rugby across the Solomon Islands. What is particularly appealing is that for the first time, girls and boys will be playing in the same field; even being given the opportunity to play together in the same team. This is what it is all about, learning and understanding the values of games, ahead of winning.”

Also at the launch was Australian High Commission Second Secretary Sam Donney, who spoke of Australia’s commitment to Sport and Rugby Union in the Solomon Islands.

“The Australian Government is privileged to work with positive partners such as SIRUF, Oceania Rugby, and Australian Rugby Union to deliver the Get Into Rugby Plus program” said Mr Donney.

“This expansion of the existing program has ambitious objectives to reach the provinces of the Solomon Islands, train coaches, develop the first Women’s 7s tournament, and hold a series of these festivals. The real strength of the program is in supporting communities and people by sharing the positive values of Rugby.”

Meanwhile newly appointed CEO of SIRUF, Mr Alivereti Mocelutu said it was an exciting time for the growth of Rugby in the Solomons.

“We have seen how well both our men’s and women’s team have performed in the recent Oceanic Rugby tournament and we would like to build on that. We are building better platforms for the future.”

“The aim of the programme is to encourage players of all ages to Try, Play and Stay in Rugby. Get Into Rugby and GIR Plus will promote the values of the Game and ensure children are encouraged to try Rugby in a safe and progressive environment,” said Mr Mocelutu.