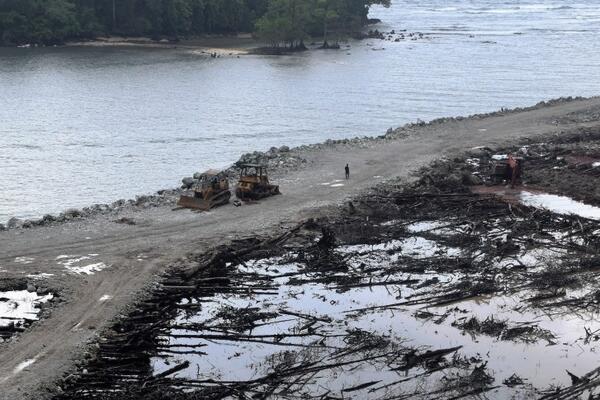 Sicolastika Okapisi cried as she watched machines raze the mangroves near her village of Mararo, Solomon Islands to the ground.

These mangroves were so peaceful that she could still hear her children back at the house while she was out foraging; they were where she went to find her late husband’s favorite roropio – mangrove worms – that he ate on his dying bed. Now, all that’s left is a log pond.

Logging in Solomon Islands is openly deemed unsustainable, with round-log exports doomed to decline if the present production rate, which is 11 times the sustainable yield, continues. Among the most afflicted by this malpractice are women, in ways ranging from food and water insecurity to domestic violence and sexual abuse.

“Logging is fracturing the landscape and causing cultural disruption, and people don’t know where they’re headed anymore,” says Tessa Minter, an assistant professor of anthropology at Leiden University. After publishing a report on the national logging industry with WorldFish, Minter is continuing to research its effects on gender issues in collaboration with the Center for International Forestry Research (CIFOR).

In the mid-1980s, after a half-century of logging being confined to colonial state-owned concessions, the government opened up customary-owned lands to the industry on the idealized notion that local communities could then deal directly with companies to negotiate better earnings and power. Instead, corruption spread like wildfire among national and local political elites, seeing rural communities lose out on benefits as well as their land, to the vast detriment of the native forest, food, water and societal systems – systems imperative to the roles and livelihoods of women.

Okapisi now has to travel by canoe to collect food for her family. It’s too unsafe for her to bring her small grandchildren along, so she leaves them home out of earshot. If the weather is rough, she can’t go at all.

Minter came to Solomon Islands when her partner started to work there with WorldFish. Having previously researched logging in the Philippines, she decided to see how the industry here compared. “I expected long-term concessions operated by few companies in limited areas of leases 25 years or longer,” she says. “That doesn’t match the image of logging in Solomon Islands at all. The vast majority of logging companies are Malaysian-owned, and their operations are patchy, short-term, unregulated and spread out in a high number of locations.”

In traveling through villages on the archipelago’s most densely populated island Malaita, Minter repeatedly heard stories that echoed that of Okapisi. She also heard much worse. With 64% percent of women between the ages of 15 and 49 reporting experience with abuse, Solomon Islands has one of the highest rates of sexual and domestic violence in the world.

“Women were easily able to talk about how logging affects their livelihoods. And from there, many women spontaneously started talking about alcohol abuse; about sexual exploitation; about how they were frustrated that they couldn’t have any jobs in the local industry themselves, while their husbands or their brothers or their sons were earning just a little bit of money that wasn’t making a substantial contribution to household needs in many cases.”

Traditional cultural norms put women on a pedestal of respect. It’s taboo to touch or approach women outside a marital context, and a bride price – though a modern topic of debate – is here seen as a manifestation of women’s value. Women are responsible for subsistence agriculture, gardening staple foods like yam, taro, sweet potato and banana, as well as collecting fresh water. In villages with access to rural or urban markets, women fish and collect shells and crabs to sell.

However, side effects of logging such as sedimentation and oil spills often force women to reconfigure these ways they provide for their families. Damage compensation rarely gets doled out for gardens attacked by the influx of weeds and pests seen in recent years; water pipes built between elevated watersheds and lower villages often get broken when logging roads are constructed, seeing women hiking or paddling farther to fill their buckets. Fixing such problems should traditionally fall to men, but Minter found that there is often little action taken.

Agreements with companies that come into a local area are generally made that village women and girls are off-limits, but these, too, are often disrespected. Minter quotes in the report an account from Diana Simarore in the West Are’Are region: “…nobody thinks heavily about it… We have chiefs here, but they don’t play their role. They should keep an eye on these things, but they don’t. We parents are weak and the chiefs are weak too.”

A silver lining of landscapes being in flux is the space they open for positive change to current systems. Here, this is seen with the “cubic” women, so-named for the price of sawn timber being based on cubic-meter measurements.

Whereas logging companies bring round logs to the market, a group of entrepreneurial women have been defiantly going into the forests themselves with portable sawmills. They take advantage of the infrastructure already in place, making deals with the foreign companies to extract and transport their sawn timber to ports and markets. Ultimately, they’re able to earn a substantial sum of money. Minter reports that four women were able to make more than USD 1,100 for a single shipment. Moreover, these earnings are more often used for expenses like school fees or housing than are logging wages.

It’s not a perfect enterprise. While using existing logging infrastructure should be free, Minter heard accounts from the women that they are still often made to pay by company personnel. “This creates a moment of vulnerability, because that payment in some cases can allegedly come in the form of sex,” she says.

Because acquiring time and tools requires start-up capital, cubic women often come from relatively privileged standings in society, and are often also prominent figures in their local women’s groups and churches. Nevertheless, they are little by little making headway for gender equality. “While the women I spoke to took the lead in their businesses, the husband often played a role in organizing all of it. These women are able to bring in a lot of money, which earns the respect of their husbands.”

The country’s main forestry law – the 1969-enacted Forest Resources and Timber Utilization Act – is currently under review, and stakeholder consultations are guiding upcoming revisions. There have been no reports yet of revisions being more gender-inclusive, and given the strong voice of the male-dominated logging industry in the consultations, Minter is not very hopeful. She additionally aims to write a manual for forestry practitioners on how to better include gender-sensitivity in this field of policymaking and implementation.

“The confusing thing in Solomon Islands, and something I haven’t come to grips with myself yet at all, is that on the one hand you have these appalling figures in terms of domestic violence,” she reflects. “But if you talk to the women, you have in no way the feeling you’re speaking to a subordinate group of individuals. Most Solomon Islands women are very outspoken, and they have clear opinions about what they do and don’t want in life.”