Futsal Facility to be Completed by December 2021 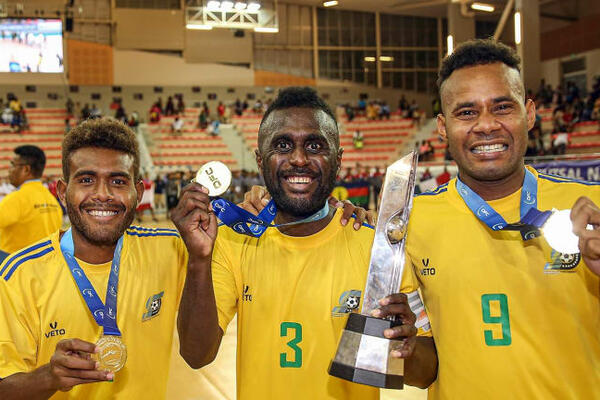 Solomon Islands have long been the undisputed kings of futsal in Oceania. Since Australia joined the Asian Football Confederation, the Kurukuru have qualified for three FIFA Futsal World Cups.
Source: FIFA.com
Share
Wednesday, 22 July 2020 08:01 AM

Construction of the Futsal Multipurpose Courts complex will commence later this year and it will be completed and handed to the National hosting Authority by December 2021.

Prime Minister Manasseh Sogavare highlighted this during his nation-wide address on Monday this week.

He said the National Hosting Authority has completed the Unexploded Ordinance (UXO) clearance on the main venue for the facility to be built.

He said geotechnical surveys are also being undertaken on site.

The Prime Minister adds that the UXO clearance on the site for the SIFF 2023 Academy is also currently being undertaken.

“The process to secure environmental assessments, development consent and building permits are in progress,” he said.

Meanwhile, the Prime Minister has also highlighted the positive developments achieved so far in the first 6 months of 2020, amidst the COVID-19 pandemic.

He said all the venues for the 24 sports have been finalised.

They include:
a. a brand new 10,000 seats stadium, a 50-metre swimming pool, 5 tennis courts, a new practice track and field, a hockey field, a multipurpose hall and a 1,200 square metre office block. All these are funded by the Peoples Republic of China.

b. a brand-new Futsal Multipurpose court complex funded by Indonesia.

d. The Solomon Islands National Institute of Sports jointly funded by the government and development partners.

e. The HCC multi-purpose hall, the Maranatha hall and the Honiara golf Club will also host several events, and

f. The water sports will likely be at the DC Park just east of the eastern end of the Henderson Airport runway.

Prime Minister Sogavare said the design team from the Peoples Republic of China, will arrive in Honiara in the middle of August to finalise the design discussions.

“The design and tendering process are being fast-tracked to ensure construction commences no later than 1st May 2021,” he said.

The last facility is expected to be handed over to Government no later than June 2023.