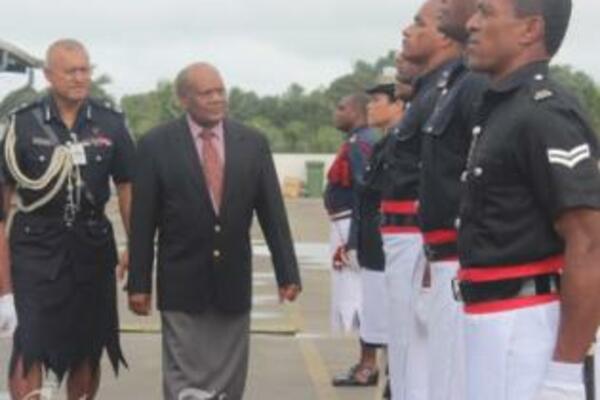 This week, Solomon Islands High Commissioner to the Republic of Fiji Islands, has met the country's Commissioner of Police, Brigadier General, Ioane Naivalurua.

During the meeting, High Commissioner Oti and Commissioner Naivalurua discussed the potential for cooperation between the two countries' Police Forces.

The two leaders also touched on the Melanesian Spearhead Group (MSG) Framework of Policing and various other policing projects such as the Regional Police Academy, Form Police Unit and Police Cooperation at the multilateral level between MSG Member Countries.

It was hoped that venturing into bilateral agreements to maintain momentum of cooperation, is vital to keeping the police cooperation alive.

Fiji with an organized police force which is recognized by the United Nations for deployments on peace keeping and security programs is willing to assist fellow MSG countries interested in having such cooperation agreements.

High Commissioner Oti said it would be a good initiative for Solomon Islands at the interim front to possibly forge an arrangement for training and attachments with the Fiji Police Force for purposes of capacity and institutional building prior to UN Peacekeeping Programs.

High Commissioner Oti will discuss further with relevant SIG authorities on this initiative as part of the High Commission's program of promoting greater cooperation between Solomon Islands and the Republic of Fiji.

High Commissioner Oti since taking up office in April is currently, conducting courtesy calls to all senior Fiji Government Officials, as well as, Heads of Regional and International Organizations based in Fiji.

High Commissioner Oti used the opportunity to convey the Solomon Islands Government's appreciation for the assistance rendered to the country's development programs and to discuss potential programs of cooperation for future developments.