From Teller to Barber 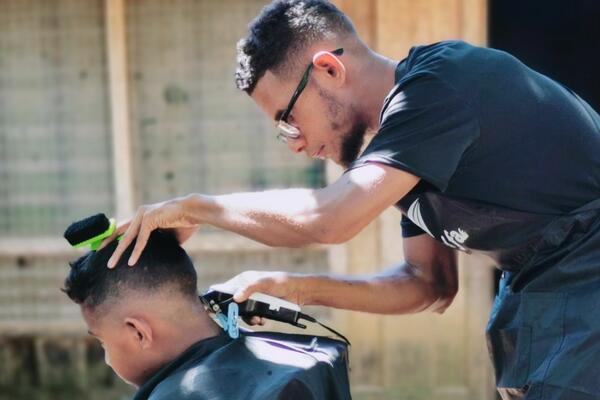 He says as the high demand from his community increased, he decided to set up a small tent in front of his house at Feraladoa’a. From then on he started charging fees.
Source: STO
By Jimmy Nolan
Share
Tuesday, 14 July 2020 08:09 AM

Today he is a successful barber, earning more than what he gets in a month as a teller.

"Hairdressing has always been my interest”, Kenaz says.

Kenaz says in the past, he used to do this as a hobby where boys come to him to cut their hair. He says at that time, he was doing it for free. From support and motivation from his friends, he started buying the tools he needed to cut hair.

He says as the high demand from his community increased, he decided to set up a small tent in front of his house at Feraladoa’a. From then on he started charging fees.

He says later he then decided to call his small enterprise, Teekay Barber.

“I started to receive more clients. In a day I can collect up to $300 dollars. In a month I can earn four to five thousand dollars”, he says.

He says when big businesses were affected from the COVID-19 pandemic; he was still able to survive. He says looking back; he has come a long way.

Kenaz did his studies at the University of the South Pacific (USP.). He says even as a student, he also cuts hair. After leaving school, he joined Western Union where he was a teller from 2016 to 2019. In between his work, he also cuts hair.

After three years at the Western Union he decided to quit his job and took up his passion as a hairdresser.

“Whatever talent you have, make use of it because not only qualification can help you earn money. Your talents can make you earn good money”, Kenaz says.

Kenaz comes from Manakwai in North Malaita. Today, he is already dreaming of a bigger enterprise for his ‘Teekay barber’. With the commitment and passion he has for his busieness, Kenaz beleives he can grow his salon into something bigger.