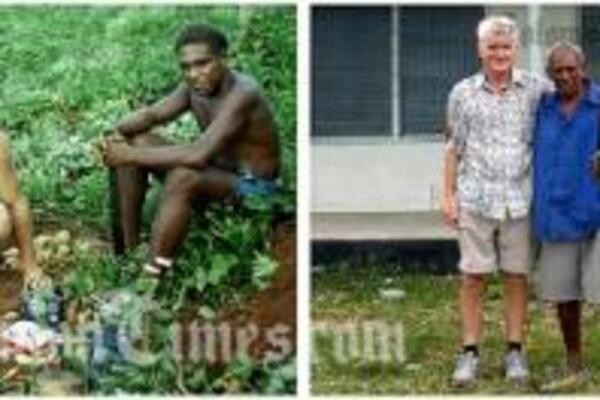 A little blue letter was all it took to reunite two friends 44 years after they last met as young men in the Solomon Islands, despite living an ocean apart.

Last month, Feilding retiree Russell Priest returned to the Solomon Islands village where, as an 18-year-old from Taumarunui, he volunteered his agricultural skills in 1968.

It was through his year-long teaching position at the Melanesian Mission junior boys' secondary school on Ugi Island, off the coast of San Cristobel, that he met Edward Houi, now 65, who was then a prefect at the school.

Four decades had passed since the men had been in contact, but a chance internet search by Mr Houi's son turned up Mr Priest's contact details.

The reunion wheels were set in motion.

"Forty-four years after I last saw him I got this little blue airmail letter," he said. "When I saw that letter I just said, 'I need to go back'."

He spent 25 years farming near Feilding before working as the national beef genetics co-ordinator for what is now Beef & Lamb NZ.

Seeing his old friend again for the first time, Mr Priest, now 63, was pleased to find him little changed but for a wrinkle or two.

"He's just a humble, funny sort, just an amazing guy and we sort of clicked like we used to . . . we just picked up where we left off.

"He is caring and generous, he has no money because he's given it all away. He has raised six children of his own and other less fortunate children too. I tried to give him some money but his son said not to - that he'd just give it all away."

Mr Priest said revisiting the islands evoked memories of hard work alongside his friend - they designed a cattle station, grew crops, and the young Kiwi, fresh out of school, taught sports and maths.

"Just reading through my diary again, I was exhausted."

He also recalls coral-reef diving with friends, and watching the sun set over the islands. "It was life-changing for me, it really was," Mr Priest said. "I just learned so much about the business of life."

The reunion trip this June was a whirlwind of nostalgia, Mr Priest said. He slept under a mosquito-net in a village with only a flicker of electricity and ate feasts with the same folk he had met nearly 50 years ago.

Mr Priest found the island villages and their inhabitants near untouched, although solar panels and a mobile phone had modernised his friend's bush lifestyle a touch.

He said he was overcome when called upon to give a speech to his hosts in Pidgin-English.

Although their reunion came late in life, sentiment did not get in the way of a business opportunity, and Mr Priest expected one of Mr Houi's sons may soon begin study at Waikato University. He also planned to offer venture capital for a dried coconut coconut plant.