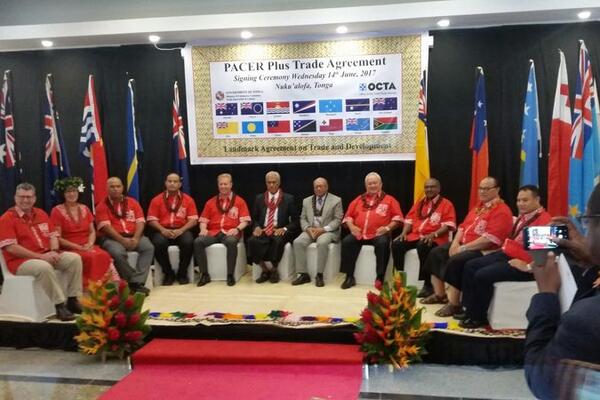 The October report, by the Pacific Network on Globalisation (PANG), claimed PACER Plus signatories would lose more than $US60 million each year, mostly in slashed tariffs, a report that Hon. Tozaka is inaccurate.
Source: radionz.co.nz
Share
Thursday, 31 January 2019 07:57 AM

Mr Tozaka was responding to an October report which claimed the deal favoured Australia and New Zealand and would cut out the rest of the Pacific.

The October report, by the Pacific Network on Globalisation (PANG), claimed PACER Plus signatories would lose more than $US60 million each year, mostly in slashed tariffs.

Analysts have also said the trade agreement could give China a strategic opening in the Pacific.

But Milner Tozaka says the report is inaccurate and riddled with errors.

He says Pacific Island signatories to PACER Plus will face zero or negligible revenue losses.

The trade deal, which has only been ratified by Australia and New Zealand so far, is due to be finalised this year.

PANG's report claimed Pacific Island countries would see significant drops in revenue from import taxes and loosened regulatory controls due to PACER Plus.

Cleo Paskal, of the global think tank Chatham House, said in an October interview that the weakened Pacific Island economies would then give way to China, which would bid for pieces of critical infrastructure, like ports, like telecoms."

"These claims are alarmist and unfounded," said Mr Tozaka.

"Naturally, PACER Plus in no way threatens public services or the right to regulate of the Parties. Neither does it provide foreigners with new rights to land or affect the right to fresh water."

In October, the Cook Islands said it was putting PACER Plus ratification on hold.

Fiji and Papua New Guinea, the region's two biggest economies, have so far refused to sign.

In January, Australian Prime Minister Scott Morrison said Australia and Fiji were undertaking a joint study on the trade and economic impact of PACER Plus.