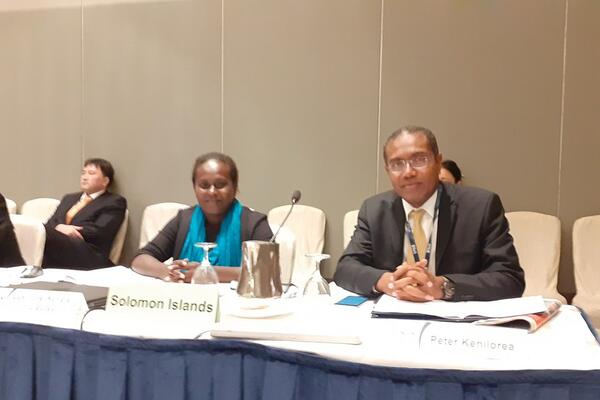 Upon an invitation by His Excellency Hon. Tan Chuan-Jin, Speaker of Parliament for the Republic of Singapore - the newly appointed Chairman of the Foreign Relations Committee (FRC), Hon. Peter Kenilorea Jr recently attended the 10th Edition of the RSIS- WTO Parliamentarian Workshop in Singapore.

Through the Temasek Foundation International, a series of workshops on Trade and Negotiations, targeting parliamentarians and key government actors were co-hosted by the S. Rajaratnam School of International Studies and the World Trade Organisation, since 2010.

The workshop was held from the 11th to 13th June, intended to deepen the global understanding of WTO and subsequently increase the capacity of regional legislators to engage in international trade with awareness on pressing global economic issues.

In his opening statement, the Temasek Foundation International Chief Executive, Mr Benedict Cheong connotes the different perspectives on the trade market. However he hoped the workshop would enhance participants to make connection with the importance of trade. He concluded by reiterating that “If we can learn from each other - we can grow together, enhance mutual cooperation and make informed policies”

Also present at the opening of the workshop was the Director-General for the World Trade Organisation, Mr Robert Azevedo re-emphasizes on the inclusion of legislators, as they do serve as the bridge between the domestic audiences interests (businesses and consumers) in their national jurisdictions for intergovernmental trade organisation, such as the WTO.

20 countries from around the globe attended the workshop, represented through experts and highly qualified guest speakers on the area of foreign policies, trade and economy.