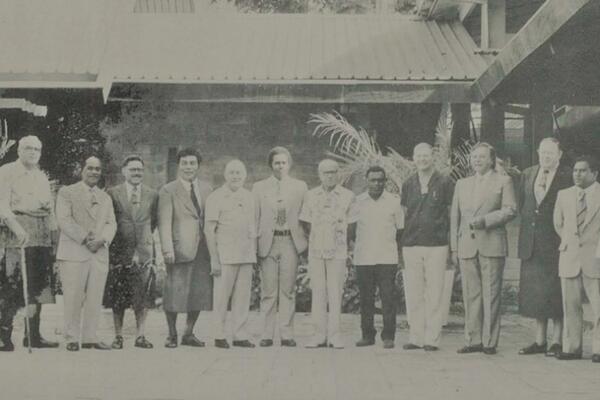 Forty years ago, 12 Pacific leaders met in the Solomon Islands under the chairmanship of the Rt Hon Peter Kenilorea (C) and adopted and opened for signature the Convention to formally establish the agency that today is known as the Pacific Islands Forum Fisheries Agency (FFA).
Source: tunapacific.org
Share
Monday, 09 December 2019 07:08 AM

“We remind ourselves that FFA members were the founding members for the Tuna Commission and since the beginning, even during the days of the negotiations for the Convention [to establish the Commission] we have been driven by the exceptional vision, forty years ago on why we do this.” Dr Manu Tupou-Roosen, Director General, Forum Fisheries Agency.

Forty years ago, 12 Pacific leaders met in the Solomon Islands under the chairmanship of the Rt Hon Peter Kenilorea. They adopted and opened for signature the Convention to formally establish the agency that today is known as the Pacific Islands Forum Fisheries Agency (FFA).

It was a time when religion was stronger, and “In the beginning…” the first words in the Bible, the most widely remembered term in the region. In 1979, leaders recognised that the terms “coastal states” and “living marine resources” in the Convention and in particular, the highly migratory species.

They also correctly anticipated the adoption of the United Nations Convention on the Law of the Sea [happened in 1982] and so they identified fisheries as a critical regional sector in which Pacific coastal states could support each other in harnessing their sovereign rights to conserve and manage their highly migratory species.

So they (i) established the FFA, specifically designed to promote the rational exploitation of highly migratory species in the region for the benefit of the Forum member countries, and (ii) came up with the vision to drive and inspire its efforts into the unknown waters of the future:

“Our people will enjoy the highest levels of social and economic benefits through the sustainable use of our offshore fisheries resources.”

Against the backdrop of this vision, FFA’s first female Director General, Dr Manu Tupou-Roosen, stopped a press conference to reflect on the significance of the Agency’s Anniversary. A pause necessary to remind all concerned about the inspiration, the relevance and wisdom of Pacific tupuna as FFA members push for one of the most important pieces of work ever undertaken by its members – tabling a Climate Change resolution calling on the full Tuna Commission membership to support united action against the greatest threat ever faced by the Pacific fishery, peoples and humanity collectively.

We must always remind ourselves of the reason why we are here,” said Dr Manu Tupou-Roosen.

“We remind ourselves that FFA members were the founding members for the Commission. And since the beginning, even during the days of the negotiations for the Convention [to establish the Tuna Commission] we have been driven by why we do this.

“It is for our people to create the social and economic benefits that come from our valuable tuna resources. This is always top of mind for our membership, no matter what specific task is given to each FFA member or to our collective membership as we undertake the duties entrusted to us by our Pacific people in the Commission.”

For FFA, it means one of the important parts of its effort is to ensure that the interests and special requirements of Pacific Small Island Developing States (SIDS) are actively considered in the decision-making of the Tuna Commission.

“This includes ensuring effective participation by SIDS in the vast work of the Commission and that there is no disproportionate burden placed on SIDS from conservation action.

“So it is an important reminder that we are here to represent those who entrust us.”

The Climate Change resolution proposed by FFA members to the 16th meeting of the Western Central Pacific Fisheries Commission 2019:

FFA members call on the WCPFC, as a collective body made up of all its member countries,to take stronger action on climate change.

We propose action on three fronts:

Increased focus and attention by the Scientific Committee’s Ecosystem and Bycatch Working Group on the implications of climate change for the region’s tuna stocks;
Active consideration by the Commission of how, through agreement of appropriate Conservation and Management Measures, it can:

FFA members look forward to working with our fellow WCPFC members to respond proactively to the threat to all of us posed by climate change.